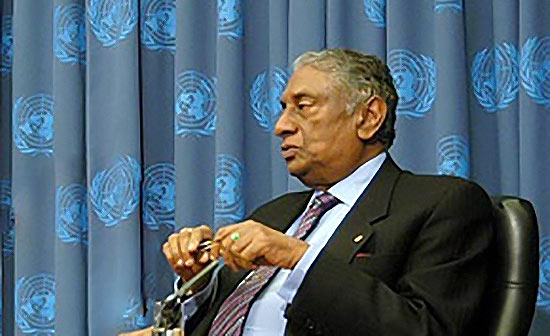 A German court convicted a Sri Lankan man Monday of accessory to murder in the 2005 killing of the Sri Lanka’s former Foreign Minister, Lakshman Kadirgamar for providing his assassins with crucial information.

The regional court in Stuttgart concluded that the defendant, previously identified only as Navanithan G. in line with German privacy rules, had tipped off members of the Tamil Tigers separatist group about Lakshman Kadirgamar’s whereabouts.

German news agency dpa reported that the court sentenced him to six years and 10 months imprisonment. The ruling can be appealed.

Prosecutors say the defendant, who applied for asylum in Germany in 2012, was a member of the Tamil Tigers’ intelligence unit.

The group was defeated by Sri Lanka government troops in 2009 following a bloody, decades-long civil war.

Dpa reported that the defendant admitted during his asylum interview in Germany that he had tipped off Kadirgamar’s assassins, but later claimed in court that his words had been mistranslated.