Hambantota district will be among four great Commercial Cities – President 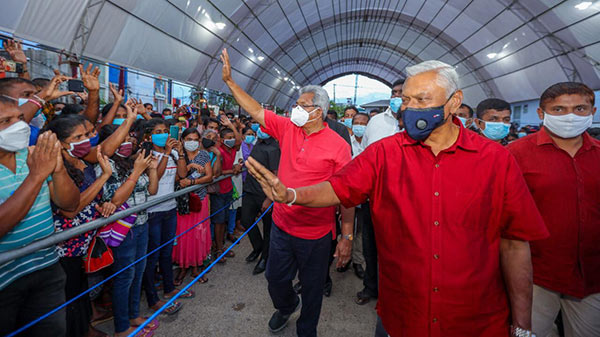 President Gotabaya Rajapaksa says that the Hambantota district will be developed as one of ‘Four Multi-dimensional Commercial Cities’ that was expected to be function as International Coordination Centres.

Colombo, Jaffna, and Trincomalee are the other districts expected to be developed as ‘Four Multi-dimensional Commercial Cities’. The President further said that the government will build a country that can compete in international markets by establishing a “C-shaped economic corridor‟ connecting two main ports and airports while integrating all business zones.

President Rajapaksa made these remarks during his campaign visit to Hambantota district, today (02) in support of the candidates of Sri Lanka Podujana Peramuna contesting the next Wednesday’s Parliamentary Election.

The President commenced his Hambantota district tour at the public meeting organized by Minister Chamal Rajapaksa near the Tissamaharama Bus Stop.

The President was accorded a grand welcome at the meeting and the public gathered at the venue presented their issues to the President.

Attending a public gathering organized by candidate Harsha Udayakumara at the Lunugamvehera Bus Stop premises, the President said that a proper and systematic programme will be implemented to provide permanent solutions for the issue of drinking water and to the issue of wild elephant threat.

The Maha Sangha extended their blessings for the success of President’s initiatives.

A girl child P.G. Pasangi donated a till with her savings to COVID – 19 Fund.

The people gathered at the public meeting organized by Minister Chamal Rajapaksa at the Sooriyawewa Public Market premises requested the President to take steps to eradicate the drug menace from the country.

The President also paid his attention to the request made by the people of the area to construct a building for Rideegama Maha Vidyalaya.

A little girl donated a till with her savings to COVID – 19 Fund.

The President who participated at the public meetings organized by candidate Upul Sanjeewa Galappaththi at the Hambantota beach garden and the candidate Ajith Rajapaksa at the Ambalantota Pradeshiya Sabha ground engaged in a cordial discussion with the people gathered at the venues.

The President was warmly received by the people when he arrived at the public meetings organized by Minister Mahinda Amaraweera near the Hungama bus stand, candidate D.V. Chanaka at the Ranna Cultural Center premises and the candidate Jayantha Wanniarachchi at the Weeraketiya Fair premises.