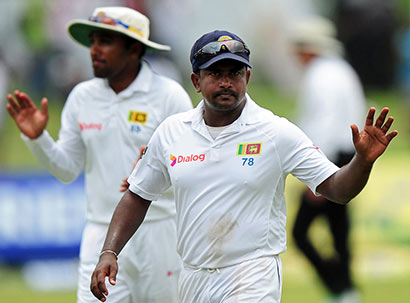 It took Sri Lanka just under an hour on the fifth morning to wrap up the Pakistan innings and kick off the celebrations at the SSC. A 2-0 win in his final series in the presence of his family, fans and team-mates – current and former, a silken-shot laden final innings – Mahela Jayawardene could not have asked for a better farewell after a glittering 17-year-old career. The firecrackers were set alight the moment Wahab Riaz top-edged a sweep off Rangana Herath to become the bowler’s 14th wicket in the match.

Emotions ran high as Jayawardene was carried around the ground by his team-mates on their shoulders, the Sri Lankan President Mahinda Rajapaksa among the hordes of fans who had come over to say their goodbyes to the legend. The Pakistan team, led by their coach Waqar Younis, joined in congratulating the batsman.

The result of the match was not in doubt once Pakistan had lost seven wickets in the last session of the fourth day but heavy showers on the fifth morning had threatened a delayed start. The clouds parted just in time for the groundstaff to get the ground ready but it still took 40 minutes for Sri Lanka to break a stubborn stand between Sarfraz Ahmed and Wahab.

Sarfraz, Pakistan’s best batsman in the series with a half-century in each innings, swept Chanaka Welegedara’s first ball in the 10th over of the day straight to deep square leg and, with Junaid Khan unavailable, it was a matter of time before Sri Lanka closed the game. Fittingly, it was Herath who picked the last wicket to complete yet another five-wicket haul and make it 23 wickets in the two Tests – a record for a two-match series. His 14-184 were also the second-best figures by a bowler against Pakistan.

From a Pakistan perspective, the margin of defeat in the series was not a true reflection of how close the matches were. Playing their first Test in seven months, the team fought hard both in Galle and Colombo, but suffered second-innings collapses. The series loss meant they also dropped from third to sixth position in the ICC Test rankings.