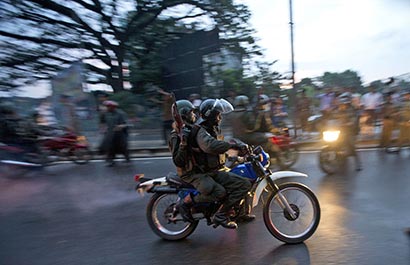 The Government yesterday appointed a three-member high-powered committee to probe the violence at the Welikada Prison which led to the death of 27 inmates on Friday evening.

The police deployed a special CID team to probe the incident, which also left several police personnel injured. The mayhem erupted when prison officials and the Special Task Force launched a search operation to seize heroin and mobile phones smuggled into the prison.

As the search operation was winding up, several hardcore criminal inmates had broken into the prison armoury and taken 82 automatic weapons which they fired indiscriminately at prison officials and STF personnel. Sixteen prison inmates who were injured in the cross-fire died on admission at the Colombo National Hospital. Eleven bodies of inmates, all hardcore criminals and some of them on death row, were found in the prison when the shooting ended.

Police and Security Forces are also on the trail of a few escapees. They recovered all weapons except five firearms. Making a special statement in Parliament, Rehabilitation and Prison Reforms Minister Chandrasiri Gajadeera said the three-member committee appointed by the Commissioner General of Prisons will also probe how the prisoners broke into the prison armoury before going on a shooting spree.

The Minister said that hundreds of prisoners had stormed out of their cells as the prison officials, assisted by members of the Special Task Force (STF) were winding up the search operation.

The prisoners who had broken free from the cells were from the two wards which had housed around 900 “special category” criminals.

Minister Gajadeera said that there are 3,621 prisoners at the Welikada prisons and regular checks are being carried out by prison officials to detect smuggled goods including mobile phones and drugs. Minister Gajadeera said that during the search operations many items were recovered. “The authorities had called in the Army as the 25 prison officials who remained in the compound could not contain the violence among prisoners”, the Minister said.

When the Army entered the prison and issued a call to surrender that too was ignored by the armed prisoners who continued firing. In the retaliatory fire by the Army, at least 11 prisoners had been killed.

“The Army with police personnel carried out search and clear operations during the wee hours of Saturday.

Army personnel recovered the bodies of inmates and several weapons that they were carrying,” Army Spokesman Brigadier Ruwan Wanigasuriya said.

“Troops of the 14 Division of the Army were deployed to assist the police on Friday. By yesterday morning we handed over the prison and we are temporarily providing security outside the prison premises,” he said.

Senior DIG Western Province, Anura Senanayake said some of the country’s most notorious criminals who were either on death row or serving life sentences were among those who had led the rioting.

They had subsequently died in the crossfire. Several prisoners who had tried to escape in a three-wheeler were also shot dead, he said.

The Commandant of the Police Special Task Force, R.W.M.C. Ranawana who was injured during the riot, underwent surgery at the Colombo National hospital.

The External Affairs Ministry confirmed that there had been no reports of foreign prisoners being injured in the Welikada prison incident on Friday.

A spokesperson for the Foreign Ministry said they contacted the Prison authorities and was told that as of yesterday no foreigner has been identified with injuries sustained due to the prison clash. It was not clear how many foreign prisoners were held in the enclosure at the time of the incident.