I DON’T THINK JUSTICE WILL BE SERVED UNLESS THROUGH A COURT OF THE PEOPLE, SAYS ANOMA FONSEKA 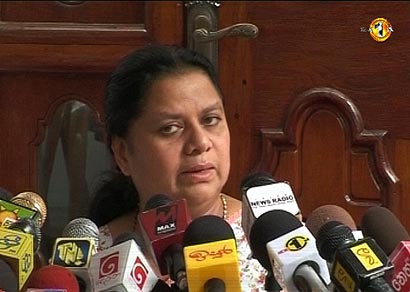 January 26, 2011: Anoma Fonseka, wife of Sarath Fonseka says that she does not think justice would be meted out unless through a court of the people.

“It has been one year since the presidential election. There were many incidents during the course of the year.

“It was my husband General Fonseka who was most affected by them. Not only our people, the people of the entire world realise this. I know that.

“I don’t think that justice will be served unless through a court of the people,” said Mrs. Fonseka.

Parliamentarian Anura Kumara Dissanayake said that a determination has been delivered on one aspect of the case, but the case regarding his parliamentary seat was still being heard.

“The Supreme Court delivered one of the most fascinating judgments in the history of this country. We filed that case on the basis that a court martial is not included in the courts system and thus it is wrong to remove him from the parliamentary seat.

“Based on that the case is still being examined regarding the removal of his parliamentary seat,” said Dissanayake.

DNA parliamentarian Tiran Alles said that the Supreme Court had not determined that the court martial decision was right.

8 Responses to I DON’T THINK JUSTICE WILL BE SERVED UNLESS THROUGH A COURT OF THE PEOPLE, SAYS ANOMA FONSEKA

Home » I DON’T THINK JUSTICE WILL BE SERVED UNLESS THROUGH A COURT OF THE PEOPLE, SAYS ANOMA FONSEKA