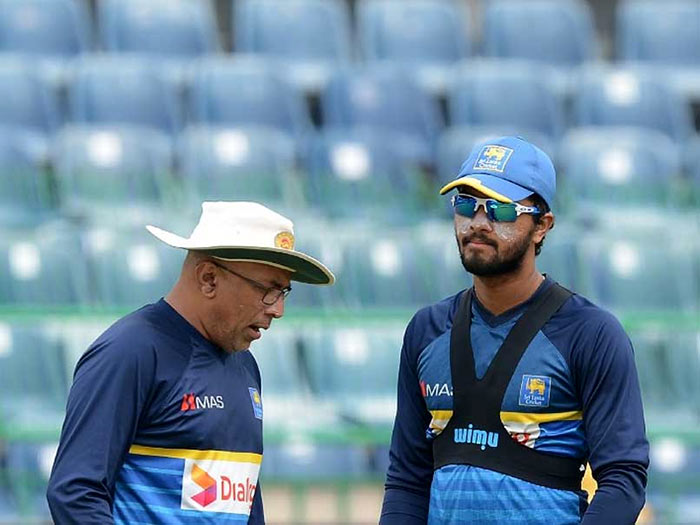 Sri Lanka captain Dinesh Chandimal, coach Chandika Hathurusinghe and manager Asanka Gurusinha have all been suspended for the first four ODIs along with both the Tests against South Africa, the International Cricket Council (ICC) announced on Monday in a media release.

The Sri Lankan trio have each received eight suspension points after pleading guilty for “conduct contrary to the spirit of the game” during last month’s Test against the West Indies in St Lucia. “Independent Judicial Commissioner’s detailed decision to be available here later today The Independent Judicial Commissioner, The Hon Michael Beloff QC, today handed Sri Lanka captain Dinesh Chandimal, coach Chandika Hathurusinghe and manager Asanka Gurusinha eight suspension points, which means the trio have also been suspended for the first four ODIs along with both the Tests against South Africa,” ICC’s media statement read.

The trio were charged by ICC chief executive David Richardson for their involvement in the Sri Lankan team’s refusal to take the field in St. Lucia on the third day of the second Test, which caused a two-hour delay in the start of play.

Sri Lankan were protesting the award of five runs to the West Indies after Chandimal was caught tampering with the ball during the previous day’s play.

Chandimal missed the third and final Test after losing his appeal against a one-match ban and a fine equal to his match fees.

Match referee Javagal Srinath had said Chandimal applied an artificial substance to the ball in violation of the ICC Code of Conduct.

Chandimal was suspected of using saliva and a sweet that he had in his mouth to tamper with the ball in an attempt to make it spin more. His act was caught by TV cameras.

“The Chairman of the ICC Code of Conduct Commission had held a hearing over video conference on Wednesday, 11 July, to determine the sanction, and, after more than six hours of hearing, which was attended by legal counsels of both the sides, had reserved his decision,” added the ICC statement.

“During the hearing, however, it was mutually agreed that, since the minimum sanction for a Level 3 offence was suspension from two Tests, the three will not participate in the Galle Test (played from 12-14 July) and Colombo Test (to be played from 20-24 July), and these will be credited against the sanction imposed by the Judicial Commissioner.

“As eight suspension points equate to a ban from two Tests and four ODIs/T20Is or eight ODIs/T20Is, whatever comes first for the player or player support personnel, the Judicial Commissioner’s ruling means the three will also remain suspended for the Dambulla ODIs (29 July and 1 August) as well as the Kandy ODIs (5 and 8 August).”

While these are first offences for Hathurusinghe and Gurusinha, this is the second time Chandimal has been sanctioned since the introduction of the revised Code in September 2016.