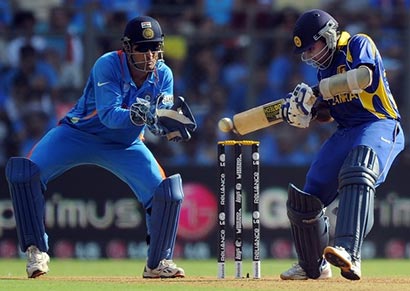 NEW DELHI: Indian skipper Mahendra Singh Dhoni won the toss and decided to field against Sri Lanka in the 11th ODI of the tri-series at Bellerive Oval in Hobart.

Zaheer Khan came back into the Indian side, replacing injured Irfan Pathan while Sri Lanka retained the same playing eleven.

If India can beat Sri Lanka with a bonus point on Tuesday, they will earn themselves an outside chance of remaining in the tri-series. If not, they can finally take the flight home.

After the defeat against Australia on Sunday, the Indians assumed that the tri-series was over for them.

India will have to chase down whatever total Sri Lanka manage in 40 overs.

India would not only need a win with a bonus point to remain alive but also hope that Australia would somehow prevail over Lanka in the last league match on Melbourne on March 2.

A bonus point though looks a wild dream for a team which has been getting all-out in most of the matches and have suffered defeats by the margin of 101, 51 and 87 runs in last three successive matches.

2 Responses to India elect to bowl against Sri Lanka