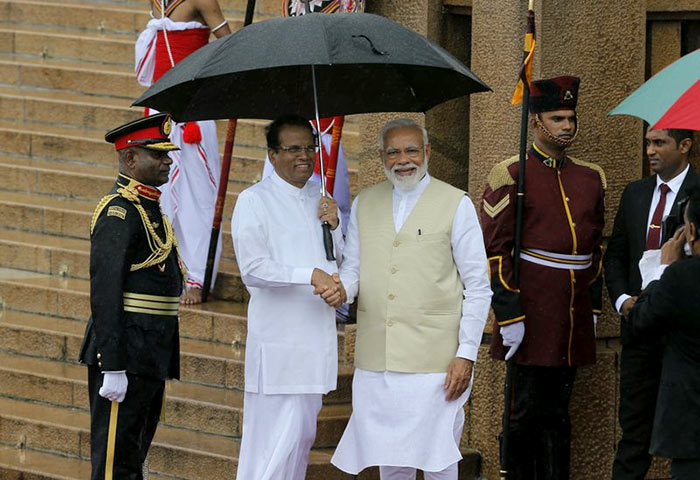 Indian Prime Minister Narendra Modi paid homage Sunday to the more than 250 Sri Lankans killed in the Easter suicide bombings, and agreed with Sri Lanka’s leaders to step up cooperation to combat terrorism.

Modi, on his first overseas tour since being reelected this spring, emphasized India’s “neighborhood first” policy during weekend visits to the Maldives and Sri Lanka.

“I am confident Sri Lanka will rise again. Cowardly acts of terror cannot defeat the spirit of Sri Lanka. India stands in solidarity with the people of Sri Lanka,” Modi tweeted after visiting the church.

Photos with the tweet showed him in discussion with Catholic priests and viewing images of attack victims and renovation work on the church. Sri Lanka’s navy is handling the church’s renovation, which is expected to be completed this week.

“Since both Sri Lanka and India have been victims of terrorism, both the leaders condemned terrorism in all its forms and manifestations and decided to step up cooperation in this critical area,” Sri Lanka’s presidential office said in a statement.

India has been concerned with Sri Lanka and the neighboring Maldives leaning toward China, which is seeking more influence in the Indian Ocean region.

Modi arrived in Sri Lanka from the Maldives, where the archipelago nation’s new president, Ibrahim Mohamed Solih, pledged closer ties with New Delhi in a departure from his predecessor’s pro-Beijing policy.

Sri Lanka leased a Chinese-built port located near the world’s busiest east-west shipping route to a Chinese firm in 2017 for 99 years in a bid to recover from the heavy burden of repaying a loan the country received to build the facility.

The port is part of Beijing’s so-called string-of-pearls plan for a line of ports stretching from Chinese waters to the Persian Gulf. In March, China agreed to provide a loan of $989 million to Sri Lanka to build an expressway that will connect the island nation’s tea-growing central region to the China-run seaport on the southern coast.

China’s influence in Sri Lanka makes neighboring India anxious because it considers the Indian Ocean region to be its strategic backyard.

Sri Lanka’s government has been trying to balance both Asian giants. Sri Lankan officials have reiterated that the port’s security will be handled by the government in an attempt to allay fears that the port could be used by China as a military hub.

In an apparent bid to offset Chinese influence, India has been helping Sri Lanka fund the building of houses and university facilities, as well as a free island-wide ambulance service. India also has extended credit to develop rail transport and a water project.