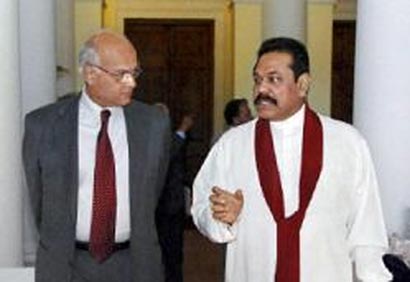 Indian National Security Adviser Shivshankar Menon says that India wants a united Sri Lanka, within which all communities feel they are in control of their own destinies.

According to Indian newspaper The Hindu, Menon made this statement addressing the media following his meeting with President Mahinda Rajapaksa

According to The Hindu newspaper, Indian National Security Adviser Shivshankar Menon refused to commit if India was satisfied with Sri Lanka’s peace and reconciliation process.

Responding to questions raised by the media on the reconciliation process Menon had stated that India wishes to see a united Sri Lanka, within which all communities feel they are in control of their own destinies and they are satisfied.

Menon has also noted that he had been briefed by Sri Lankan authorities on the reconciliation process adding that it was ultimately up to the Sri Lankans to move the process forward.

According to The Hindu newspaper the Indian National Security Adviser had stated that he would refrain from making statements which could make the atmosphere more difficult, for the reconciliation process.

Menon has also noted that political reconciliation is clearly a Sri Lankan issue but India will continue to remain engaged with all concerned and continue to support Sri Lanka’s efforts.

According to to The Hindu, Menon’s trip is shortest in recent times by an Indian official and was aimed at taking stock of the reconciliation process.