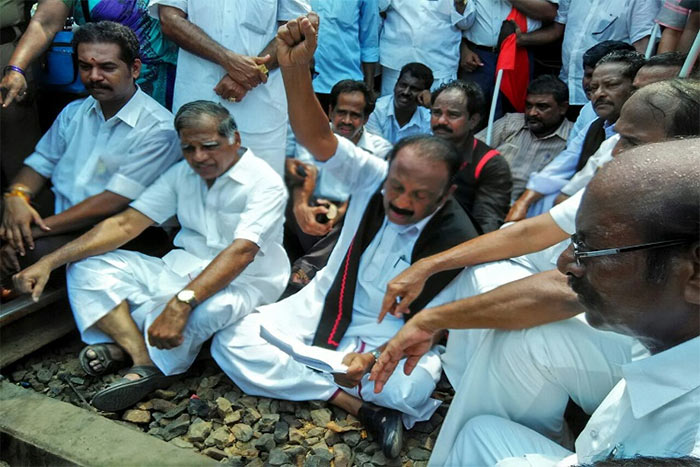 Indian Rajya Sabha MP and MDMK Chief Vaiko and his supporters were detained by the Delhi police on Thursday (28) near Jantar Mantar, during protests against the visit of Sri Lankan President Gotabaya Rajapaksa.

Over 500 protesters gathered in the capital to demand that any permission given to the Sri Lankan President to visit India be revoked. Protesters who were holding placards and raising slogans condemned External Affairs Minister Jayashankar’s attendance at Gotabaya’s swearing-in ceremony.

According to reports, the protesters were detained and had been taken to the Parliament police station.

The MDMK chief voiced criticism against inviting a leader alleged to be responsible for war crimes in the Sri Lankan war. He alleged that ‘gun-toting’ soldiers were roaming the streets of Sri Lanka inhabited by Tamil people and that their areas have become concentration camps controlled by the army.

He further compared Gotabaya’s government to that of Hitler’s reign.

At the protest, Vaiko reportedly alleged, “Indian government is inviting the murderer who killed thousands of Tamils during the final Eelam war which happened in Sri Lanka and he is a war criminal who unleashed the Sri Lankan army against the Tamils when he was the Defence Secretary…Indian government inviting him for the bilateral talks will affect the sentiments of 8 crore Tamils who are living in India.”

Earlier this month, when Gotabaya won the Presidential election, Vaiko had alleged, “This day gives great sorrow and shock. Mahinda Rajapaksa is responsible for the killing of lakhs of Tamils, widowing 900,000 women; innumerable women were violated, genocide was committed without concern for children or the elderly. Thousands who disappeared are yet to be found. Gotabaya Rajapaksa was the one responsible for executing all this. He has the blood of Tamils on his hands.

The MDMK chief has vociferously raised issues regarding human right violation against Sri Lankan Tamils in the past. He had even pulled out of the NDA alliance in 2014, in protest over Prime Minister (PM) Modi greeting former Sri Lankan president Mahinda Rajapaksa at a SAARC summit in Nepal.