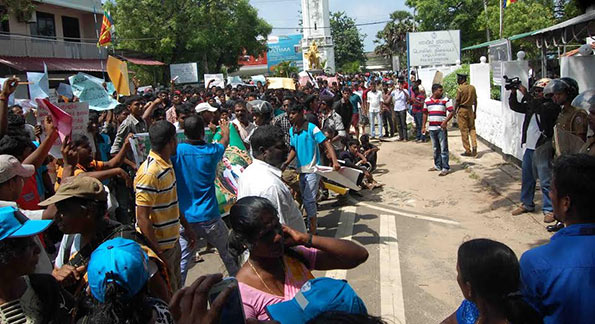 Jaffna residents protested opposite the Jaffna Courts complex yesterday (20) demanding the death sentence for all those responsible for the rape and murder of 18-year-old Sivaloganaadan Vithiya, a student of the Jaffna Kayts Punkuduthivu Maha Vidyalaya.

Police Anti-Riot Squad personnel had to use tear gas to disperse the protesters who attempted to clash with Police who had cordoned off the area surrounding the Courts complex, by attempting forcible entry into the Courts Complex.

Two vehicles parked inside the Courts complex were damaged in an attack with stones on the Police.

Police Special Task Force personnel were deployed in the area as a security measure when two Police officers sustained injuries in the confrontation.
A large numbers of residents supported the protest demonstration.

On Tuesday (19) the business community of Jaffna closed shops and offices as a sign of protest against the rape and murder of the schoolgirl calling angrily for the heads of the killer-rapists.

School teachers too participated in the protest.

A group led by Tamil National Alliance MP Mavai Senathirajah had urged the Police to give the suspects the maximum possible punishment.

Prior to this, three brothers had been arrested on suspicion and produced at the Kayts Court after which the trio had been remanded till 6 June.
Meanwhile, a massive crowd attended on 15 May the funeral of the 18-year-old rape-murder victim at the Punkuduthivu Cemetery.

A Special Criminal Investigation Department (CID) team has been appointed by the Inspector General of Police (IGP) to investigate the Punkuduthivu gang rape-murder case.

Police sources said the special team was sent to Jaffna yesterday to open its probe into the crime.

Police yesterday arrested 127 protestors who attacked the Jaffna Courts Complex when the Punkuduthivu gang rape suspects were produced before the Magistrate.

The Jaffna courts complex came under attack yesterday when eight suspects of the Punkuduthivu gang rape were produced in courts, barring the ninth suspect who was arrested in Wellawatte on Tuesday (19) night who was not produced in Court due to security reasons, Police said.

Tension spread throughout Jaffna yesterday when protestors created havoc within the Courts Complex. Protestors pelted stones at the Courts Complex demanding that the Police hand over the suspects to the public, by surrounding the entire Jaffna Courts area.

Protestors even broke through barricades and burnt tires on the roads to vent their anger at the suspects.

However Police managed to control the situation and disperse the protestors by firing tear gas.

Two Police constables were injured during the attacks as the protestors pelted stones and ran amok.

Sadly, even the 18-year-old gang rape-murder victim’s mother lost consciousness when the Police used tear gas on the protesters.

Reports said the victim Vithiya’s body was found in an abandoned house in Punkuduthivu on 14 May following which police initially arrested three suspects and later six other suspects. Medical examinations proved that she was gang raped and murdered. She went missing on 13 May.

Meanwhile several other protests were staged in the North and East condemning the incident and the protestors demanded immediate justice.

The Jaffna Magistrate ordered the first three suspects to be remanded until 28 June and the other five until 1 June.