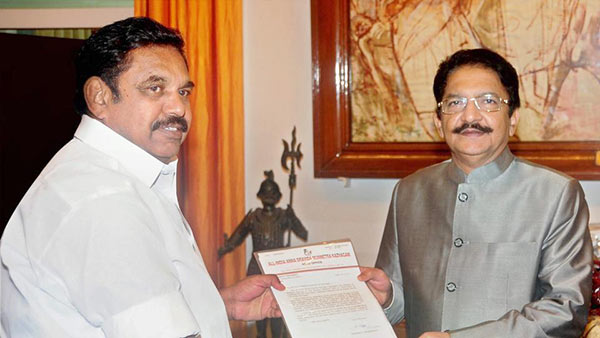 Hours after E Palaniswami met with TN Governor C Vidyasagar Rao to ask that he be made Tamil Nadu’s Chief Minister, he’s been invited for a follow-on session. The political compass of the state, therefore, is pointing towards the likelihood of a third Chief Minister in two months, the NDTV reported.

J Jayalalithaa, the matriarch of the ruling AIADMK, died in December while still in office. Regular understudy O Panneerselvam was sworn in within hours as her replacement. Then, about two months later, Ms Jayalalithaa’s live-in aide, VK Sasikala, said she would take over from Mr Panneerselvam. Uncharacteristically, he refused. A week-long feud replete with feature film-worthy drama ensued. Then, the Supreme Court provided the mother of all plot twists by sentencing Ms Sasikala to jail for corruption in a case that was over two decades old.

Which brings us to Mr Palaniswami, 57, who was quickly chosen by Ms Sasikala as her proxy and is now the AIADMK’s official choice for presumptive Chief Minister.

Mr Panneerselvam, 66, has not subscribed to that decision. He also met with Governor Rao last night, pitching that as Acting Chief Minister (protracting his track record of standing in, he was asked to remain caretaker till the new head of state was formalised), he deserves the chance to prove that he has the majority of support in the legislature.

Both Mr Palaniswami and Mr Panneerselvam presented signatures of the party lawmakers who are in their camps. The former offered 124; the latter, eight. Which, constitutional experts say, should give Mr Palaniswami the front-runner by a long shot.

But the Governor’s concerns reportedly include the fact that for nearly a week, the legislators who’ve signed their support for Mr Palaniswami have been made to stay at a resort on the outskirts of Chennai to ensure they don’t stray. Two said they “escaped”, one by using a “disguise of Bermuda shorts and a t-shirt” – nothing as complicated as a fake moustache was needed, just the outfit supposedly did the trick – and he has filed a kidnapping case against  Ms Sasikala and Mr Palaniswami. The legislators camping out at Golden Resort Bay dismiss talk of “a hostage crisis”, as alleged by the rival team, as claptrap. They have informed the police in writing that their stay is voluntary.

If the Governor chooses Mr Palaniswami, he will be sworn in as Chief Minister and then told to take a trust vote. There are 234 legislators in all; at least 118 must back him; his faction claims to have 124, making him a safe bet.