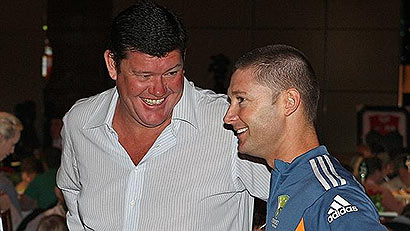 The signing comes as Mr Packer sharpens his campaign to build a $400 million luxury casino resort in Sri Lanka, tapping into the country’s love of cricket to build public support.

Clarke appears in a high-class promotional video released today by Crown at www.crownsrilanka.com.

Clarke describes Crown as a “first-class business”, which employs more than 14,000 people and has provided training for 4500 staff through special training academies.

“I look forward to providing a helping hand to support and mentor young people in all parts of the country, ensuring Sri Lankans get the training they deserve and an opportunity for a career in hospitality,” Clarke said.

Mr Packer, Crown’s executive chairman, has had a long association with Australian cricket, with his father, Kerry Packer, instigating the World Series Cricket revolution in the late 1970s.

Crown is in the final stages of winning government approval to build a 450-room integrated resort on a lake in the Sri Lankan capital of Colombo.

Mr Packer believes Sri Lanka is on the verge of becoming a major tourism destination and hopes to appeal to the growing Indian middle-class with Crown’s Sri Lankan property.

The Sri Lankan parliament is expected to debate legislation regarding the Crown proposal on Thursday.