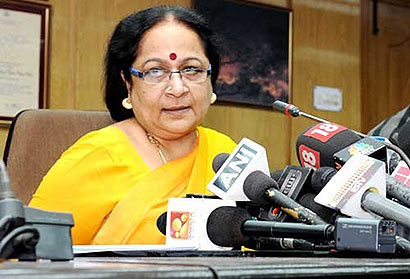 CHENNAI: Union environment and forest Minister Jayanthi Natarajan has asked the Federation of Indian Chambers of Commerce and Industry (FICCI) to cancel a tour of Sri Lanka organized by it for a group of Indian parliamentarians to facilitate bilateral talks.

“I feel that this is a trip which if undertaken, will be deeply hurtful to the cause of innocent Sri Lankan Tamils. I feel very strongly that FICCI should show solidarity with this cause and refrain from sending a parliamentarians team to Sri Lanka at this time,” she said in a letter to the FICCI president.

Jayanthi said she has written the letter in a personal capacity and would also communicate with the MPs in the delegation to avoid the trip scheduled from April 8 to April 12.

“I wish to strongly urge you, in my personal capacity, and as my very passionately held personal conviction to desist from continuing with a ‘business as usual’ scenario, and sponsoring and facilitating a visit by Indian Parliamentarians to Sri Lanka”, she said.

She said such a visit would give rise to an avoidable impression that the “anguish and turmoil” being felt by Tamils and the whole country over the human rights violations against Sri Lankan Tamils had not been supported or taken seriously by FICCI. She said the proposed trip runs directly contrary to the anger and sorrow felt by Tamil Nadu people regarding the human rights violations by Sri Lankan government.

The Congress leader criticized the Sri Lankan government, saying despite a constructive aid offered by India Colombo has failed to properly deliver these resources to the intended recipients.

Her letter comes close on the heels of Union shipping minister G K Vasan expressing his opinion that the Indian government should not participate in the Commonwealth heads of government meeting (CHOGM) slated to be held in Colombo in November. He had also met PM Manmohan Singh in this regard recently. (The Times of India)