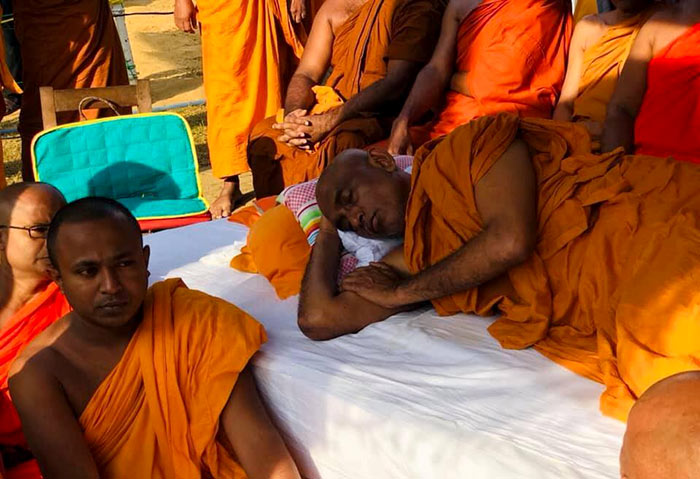 The Jathika Hela Urumaya (JHU) has requested rebel MP Ven. Athureliye Rathana to engage in what it calls collective action against those who assist and sponsor terrorism instead of taking unilateral actions.

Batticaloa-based TNA MP S Viyalendran, on Saturday (June 01), launched a hunger strike in the East in support of Ven. Rathana Thera. Both MPs have signed the no-confidence motion against Minister Bathiudeen over his alleged links to those responsible for the Easter Sunday carnage.

While urging President Maithripala Sirisena to address instability and insecurity caused by the Easter Sunday carnage, the JHU requested President Sirisena to take a decision on Governors appointed by him and consult Prime Minister Ranil Wickremesinghe on Minister Bathiudeen.

The JHU warned unless President Sirisena acted swiftly, protests could rapidly spread to other areas.

Ven. Rathana was accommodated on the UNP National List as a JHU nominee following the last parliamentary polls in Aug 2015. In January 2017 he declared that he would function as an independent MP. JHU General Secretary Ranawaka requested Ven Rathana to quit his National List seat before exercising his freedom to engage in whatever protest campaign.

Joint Opposition sources told The Island that they were engaged in talks with members of other parties to secure support for the no-faith motion against Minister Bathiudeen.

The two-day debate is scheduled to take place on June 18 and 19.