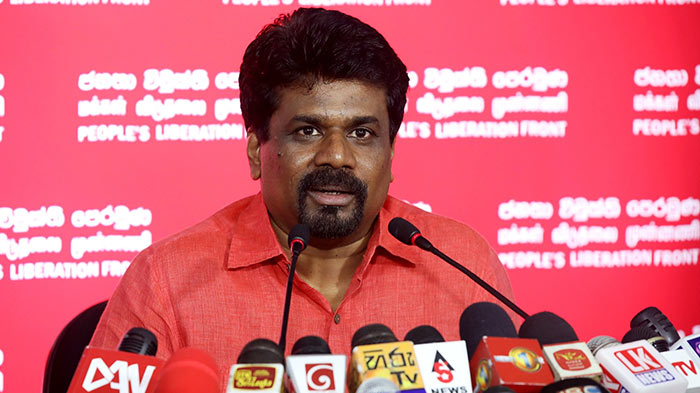 The JVP yesterday alleged that the government had chosen to muscle Facebook and social media instead of controlling the prices of essential food items.

JVP leader Anura Kumara Dissanayake, addressing the media at the party headquarters in Pelawatte said: “The government should be controlling the prices of essential goods in the market. But it has allowed traders to fleece consumers and is busy devising ways and means of throttling social media.

“The government has total control over almost all media. In that context, social media is the only means left to the people to know the truth. A large number of Lankan civil society members, citizens and activists are using social media and people access them because they have lost faith in the mainstream media owing to government control. For example, the issue of Justice Minister Ali Sabry shifting his office to a new premise at a cost of Rs 17 million has been raised by social media. It is thanks to social media that waste of public funds was prevented. Social media has become a headache to the government. That is why Media Minister Keheliya Rambukwella is trying to introduce regulations to social media use in this country. We condemn this undemocratic act. We call on people to line up with us against the government’s plans to muscle social media.”

The JVP leader said that Facebook and social media platforms had created a positive space for public conversation that did not exist before in the country. “Social media help share stories and comment on current affairs. It is in this context Minister Rambukwella, announced the registration of social media users in the country. This move is a crackdown on freedom of expression of the citizens.”