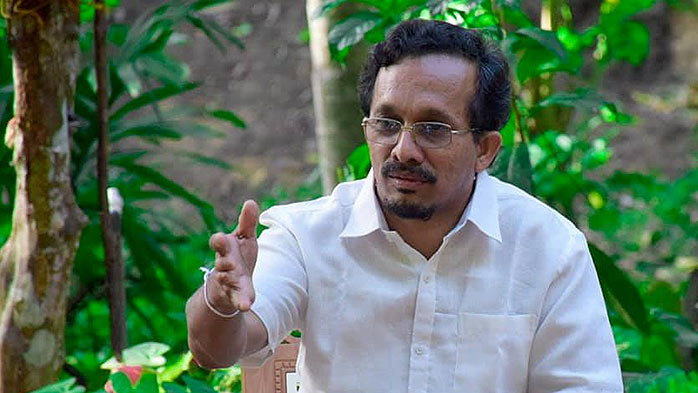 Although the NPP finished third in Matara winning 37,136 votes Handunnetti failed to secure a Parliamentary seat.

He feels that voters prefer corrupt politicians and therefore they don’t cast votes in favour of genuine politicians.

What do you have to say about the overall election results?

People have given the mandate to the Government as expected. They wanted a two-thirds majority vote and they got it.

People expected you to win a seat at the Parliament and change the trend in the South. Does the outcome mean that the South has become immune to the Rajapaksas?

The NPP fared better than the ‘grand old party’. Your thoughts?

The UNP is experiencing a massive internal crisis. When they obtained power they worked against the mandate given to them by the voters. They protected rogues including those involved in the Central Bank bond scam. These were the main factors that contributed to their defeat. Besides we cannot be satisfied with the fact that we got more votes than them. We in fact didn’t get the expected votes.

The NPP is taking forward a few leftist ideologies from its parent party the JVP. But the majority of the people started hating the JVP after the insurrections etc. Where did the JVP go wrong?

The JVP didn’t go wrong. But we should be asking where the people went wrong. We haven’t robbed people’s money or protected rogues. People say we speak the truth and all that, but then why aren’t they casting their votes? However now, many professionals and people who genuinely love this country have joined the JVP. That itself shows that change is taking place.

Would it be that people have lost trust in the JVP because of its bloodied history?

There are some people who haven’t forgotten the past. If people didn’t forget the insurrections how did the JVP forge an alliance with the Sri Lanka Freedom Party in 2004? One shouldn’t forget that the JVP obtained more votes than the SLFP. When people vote they forget the fact that some people have been alleged to have a direct link with murders. This is why people like Pillayan and Karuna Amman get votes.

But what do you have to say about the insurrections. Were such incidents necessary?

In 1983 the JVP was banned by the J. R Jayewardene Government. This was the reason for the insurrections. If we weren’t banned we would have been in Parliament from then onwards.

In an interview you openly said that you have maintained a clean rapport throughout your political career. But there are some questionable candidates, particularly those who have cases against them being elected to Parliament this time. Some of them have received the highest number of preferential votes too. Does it mean that corruption is a way of earning people’s respect?

People like corrupt politicians. Although we call them rogues people don’t call them that.

Dr. Harini Amarasuriya has been selected to represent NPP from the National List. Isn’t it a historic moment for the party since she’s not only an academic, but a female representative as well?

Indeed. The JVP joined hands with other groups to form the NPP. The NPP only won 3 seats and she was selected from the National List. She has taken quite a difficult decision for the sake of the country and its people because she has to resign from her post as lecturer at the university and she will not receive any allowances from the university thereafter.

However this time there are also several academics and professionals who have been elected. Your comments?

That is the kind of people who need to represent people at the Parliament. If they work with an open mind they’ll be able to revive the Parliament from its fall.

You were appointed as COPE Chairman twice and you were able to investigate on several matters regarding the Central Bank bond scam, issues in Sri Lanka Cricket etc. But as we know, COPE cannot bring perpetrators to justice or punish them. The election results reveal that your work in the COPE committee hasn’t been recognised by the people. Your comment?

Most voters do not know what happens in Parliament. So how will they know what happens in the COPE Committee sittings? Our education system doesn’t teach students about this committee and it’s functions. But the newly appointed Government has a challenge in continuing with its operations. We have been telecasting live it’s proceedings and the Government cannot stop them. The Opposition will have to appoint a chairman. We were also able to introduce a trend in which the subject minister responsible for the avenue was asked to sit outside, so that they cannot influence proceedings and so on.

What role has the Opposition got to play to ensure that the COPE Committee functions smoothly?

In this Parliament the Opposition has no place. It’s the Government that has to ensure its smooth functioning.

But shouldn’t the Opposition hold the Government accountable in places where they do wrong?

The Opposition can show where the Government goes wrong. But only that. For example there are massive issues associated with the list of graduates who would be employed. The names have been listed in an unfair manner. But I doubt if they would consider such complaints and have a re-selection.

What about those who voted for Opposition parties? Do you mean to say that their votes have been wasted?

Yes. Actually it’s a waste. What can an Opposition do in a Parliament that can pass any piece of legislature that can favour them because they have been elected by a majority?

Another significant feature was the rejected votes and election observers speculate that people have deliberately manipulated their ballot. What message does that give?

That shows that people don’t know how to cast their vote.

There are major irregularities in campaign financing which affect most candidates who aren’t so popular with the masses. But why hasn’t any such candidate voiced strongly on this matter? Is it because they are rich anyway?

An election demands a give and take policy. Politicians who cannot be bought over for money will lose. This has affected parties such as the NPP. We are trying to shift this trend and for that the Elections Commission has to play an active role.

What would be the future of the JVP or NPP from now onwards?

It depends on how the Government is taking things forward.