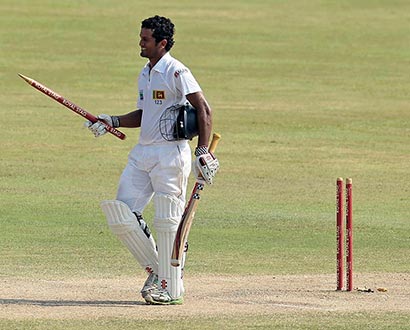 SYDNEY (Reuters) – Dimuth Karunaratne was approaching his maiden test century as Sri Lanka reached 130 for one in their second innings at tea on the third day of the third test against Australia on Saturday.

A brilliant unbeaten century from Matthew Wade had earlier given Australia a first innings lead of 138 when they declared at 432 for nine just before lunch.

Karunaratne, who was unbeaten on 83 at the end of the second session, and skipper Mahela Jayawardene (38 not out) had combined for 106 to reduce the deficit to eight runs after Tillakaratne Dilshan departed soon after lunch.

Mitchell Johnson, the only one of Australia’s four pace bowlers not to get a wicket in the first innings, removed Dilshan for five when the opener caught an edge to his delivery and the ball carried to Phil Hughes in the slips.

Karunaratne, though, was in no mood to capitulate and batted steadily at first before opening up to reach the break with 11 boundaries on the board.

The best of them was a huge lofted six over long-on off Nathan Lyon with which he brought up his second test fifty after the impressive quickfire 60 on debut which secured a victory over New Zealand in Galle last November.

The 24-year-old lefthander survive a big scare on 54 when wicketkeeper Wade failed to hold on the ball behind the wickets after he got an outside edge to a Lyon delivery.

It was a huge disappointment for Wade, who had dominated the morning session with a knock as bright as the pink clothes sported by much of the crowd in support of former Australia fast bowler Glenn McGrath’s breast cancer charity.

The 25-year-old lefthander had resumed on 47 with Australia just 48 runs ahead of Sri Lanka’s first innings tally of 294.

It has been anything but a chanceless innings but Wade comfortably reached his third test half century in the second over of a brilliantly sunny day at the Sydney Cricket Ground.

Peter Siddle was also playing a few shots at the other end as the pair put on 77 for the seventh wicket but it was the sheer power of Wade’s strokes that caught the eye.

Siddle was caught behind for 38 off Nuwan Pradeep 50 minutes into the session and Mitchell Starc lasted just five further minutes before departing for two, trapped lbw by spinner Rangana Herath (4-95).

When Lyon departed 10 minutes later for four – bowled through the gate by Herath – it looked like the last rites for Australia’s innings at 393 for nine, just 99 runs ahead.

Wade, who was on 70, had other ideas and with Jackson Bird offering support with his first six test runs at the other end, he bludgeoned his way to his second test century.

He reached the mark by smashing his ninth four to deep cover and then raced around the ground, arms stretched wide, to take the applause of the crowd in an emotional celebration of his first hundred on home soil.

Wade faced just two more balls but still had time to be dropped on the boundary by Dhammika Prasad before captain Michael Clarke decided 138 was a big enough lead and declared.