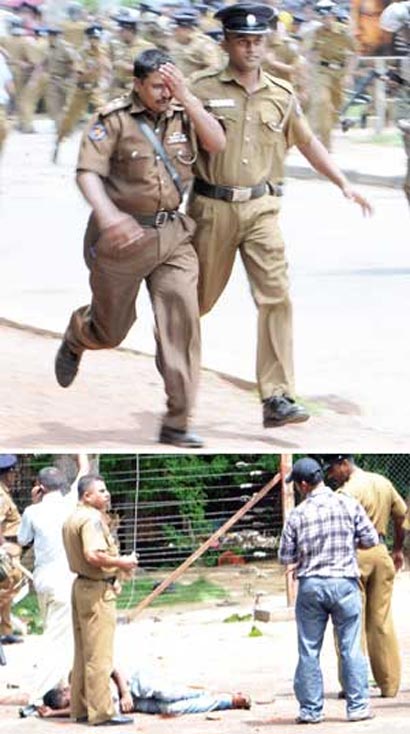 Over a dozen police personnel, including DIG Ravi Wijegoonewardene and many garment workers were injured in clashes between the police and the Katunayake Export Processing Zone (EPZ) workers yesterday.

The police alleged that they had no option but to use force after hundreds of garment workers targeted the Katunayake police station demanding that the government abandon its controversial Private Sector Pension (PSP) Bill. The police fired into the air, though some workers alleged that two protesters were shot dead and their bodies removed. The police denied the charge.

Speaking on behalf of the National Trade Union Centre, affiliated to the JVP, former JVP MP Lal Kantha alleged that three workers had been seriously wounded at the hands of the police.

The battle erupted in the wake of Labour Minister Gamini Lokuge’s declaration that garment workers would be excluded from the private sector pension scheme due to intervention by politicians and trade unions.

Minister Lokuge made an abortive bid to win over the workers during a hastily arranged visit to Katunayake EPZ, where a section of the workers shouted at him. Some workers went to extent of accusing him of trying to rob them of their hard earned money.

The police said that DIG Wijegoonewardene had been among 15 officers and men attacked by protesters. Sources said that the protesters caused damage to the canteen and four vehicles at the police station.

The police detained over 100 workers.

IGP Mahinda Balasuriya told The Island that the Criminal Investigation Department (CID) had been directed to launch a special investigation into the latest incident.

Last week, thousands of EPZ workers blocked the road at the 18th Mile Post for over six hours.

A wounded garment worker receiving treatment at the nearby government hospital at Seeduwa told The Island that armed police had stormed some factories at the Katunayake EPZ and brutally attacked workers before taking some of them into custody. The worker said that at least 60 persons had received injury due to what they described as indiscriminate police action.

The JVP yesterday alleged that the Rajapaksa government had directed the police to beat up workers as part of its strategy to silence the working class. An attempt was being made to take over EPF and ETF funds by the government at the behest of the International Monetary Fund (IMF), the JVP said. The government had created an explosive situation, a trade union activist told The Island, warning that failure on the part of the administration to settle the dispute amicably could cause chaos in EPZ and other private sector enterprises.