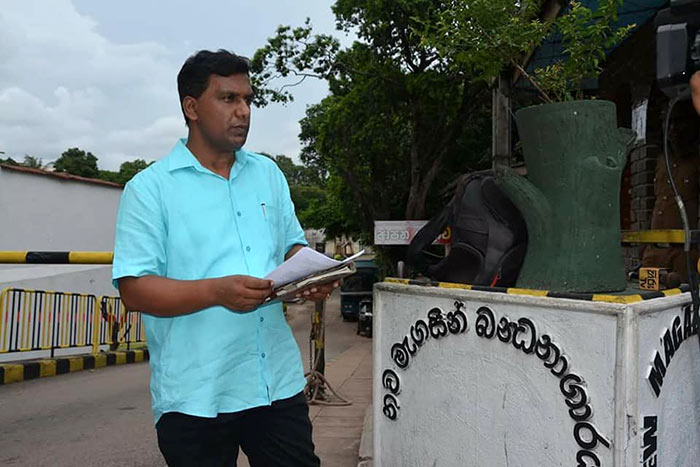 Director of the Campaign for Free and Fair Elections (CaFFE) Executive, Keerthi Tennakoon, yesterday handed over a letter to Perpetual Treasuries (Pvt) Ltd (PTL) owner Arjun Aloysius and its former CEO Kasun Palisena, through Welikada prison officials, requesting them to reveal the names of politicians who had received money from PTL.

“Neither President Maithripala Sirisena nor his Secretary Austin Fernando has any intention of releasing the Presidential Commission of Inquiry (PCoI) report on the bond scams.

Fernando has sent us on a wild goose chase and that is why we have decided to ask Aloysius and Palisena directly about their campaign contributions.”

Tennakoon said that according to Sri Lankan laws a person could donate money to political campaigns and such donations were not illegal under election laws.

“Thus, there is no legal barrier for revealing the names of politicians who received money from the PTL. I have requested Aloysius to reveal the names of individuals who received his donations between January 01, 2010 and December 31, 2017,” he said.

“Due to the revelation that a large number of individuals had received money from PTL, almost all politicians are asked whether they, too, have received PTL money.”

Austin Fernando, the Secretary to the President, last week stated that anyone could obtain the full Presidential Commission of Inquiry (PCoI) report on the bond scam from the National Archives. However, when CaFFE attempted to access these documents it was revealed that those documents had been embargoed for 30 years.