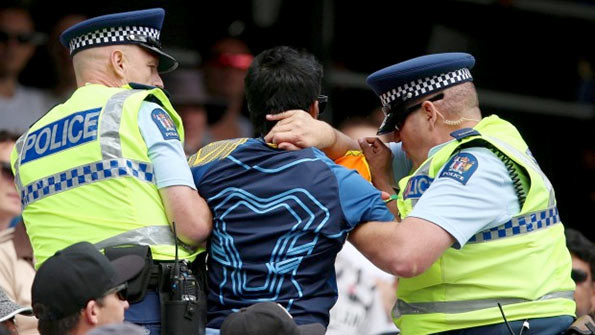 Spectators trying to enjoy the New Zealand vs Sri Lanka Twenty20 cricket match at Eden Park seem to have their eyes on something else.

Twitter and Facebook are rife with accusations security guards are acting as the “fun police” and being too hard on fans, confiscating musical instruments and kicking people out.

Witnesses have reportedly seen Sri Lankan fans being escorted from the ground by police and security guards, the Stuff news agency in New Zealand reported.

In video footage they can be heard booing as security moves in on a group of fans. A spectator, who didn’t want to be named, said security guards were hanging around a group of Sri Lankan supporters near the boundary. About six of them had been evicted. “They seem loud but well behaved and self contained,” he said.