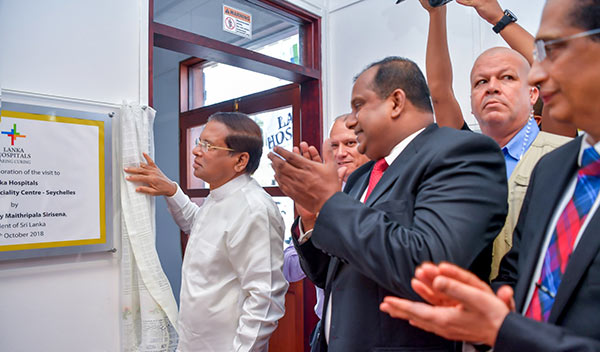 Four months since it started its operations in Seychelles, Lanka Hospitals, the first overseas branch of the Sri Lankan based medical and specialised centre, was officially opened by President Maithripala Sirisena of the Democratic Socialist Republic of Sri Lanka in a brief ceremony yesterday afternoon as part of the activities on his three-day state visit.

President Sirisena was accompanied by Minister for Health Jean-Paul Adam who assisted in unveiling the official plaque marking the official opening of the hospital, which started its operations on June 16 this year.

The President was greeted upon his arrival at the healthcare centre located on Francis Rachel Street by traditional Sri Lankan Kandyan drummers before undertaking a tour of the facilities.

Chairman of Lanka Hospitals, Dr Sarath Paranavitane, thanked President Sirisena for opening the health centre stating that it will serve to endorse and strengthen the relationship between Sri Lanka and Seychelles.