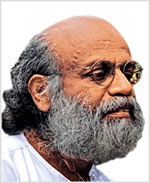 Afghanistan, Bhutan, Bangladesh, India, Maldives, Nepal, Pakistan and Sri Lanka sent delegates for the 13th edition of the festival. The award was given away by Dr Suresh K Goel, Director General of the Indian Council of Cultural Relations, at the Grand Hotel in Agra. SAARC Literature Award is given annually to eminent writers from the South Asian region who have contributed to the promotion of literature through their writings and literary initiatives. Courtesy: Manoramaonline

1 Response to Lankan among five writers honoured at SAARC Festival