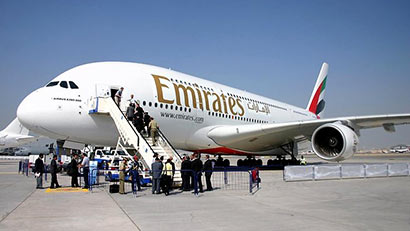 Police at Arlanda airport in Stockholm have arrested a man suspected to be a Sri Lankan national who attempted to enter the cockpit of a plane destined for Sweden claiming he had a bomb, foreign media reported.

The Emirates airline flight, which departed from Dubai, was due to arrive at Arlanda before midday on Sunday. Not long after the plane left the United Arab Emirates, drama unfolded as they would be bomber rushed through the cabin screaming and shouting according to witnesses.

Passengers reported that he tried to break into the cockpit before he was apprehended by members of the crew. He was wrestled to the ground and had cable ties put around his arms reports the TT news agency.

The man was kept stable for the remainder of the flight with passengers saying he was lying on the floor.

“There was no chance he would have been successful in trying to get into the cockpit,” Kenneth Knuts of the border police at Arlanda told TT.

“We met at the flight a man from Sri Lanka who had caused a disturbance onboard and had been shackled by the staff,” Albin Näverberg of the Stockhollm police told Expressen.

When the plane landed at Arlanda at 11am the man was taken in for questioning and subsequently arrested on suspicion of attempted aviation sabotage.

4 Responses to Lankan arrested after bomb threat on plane