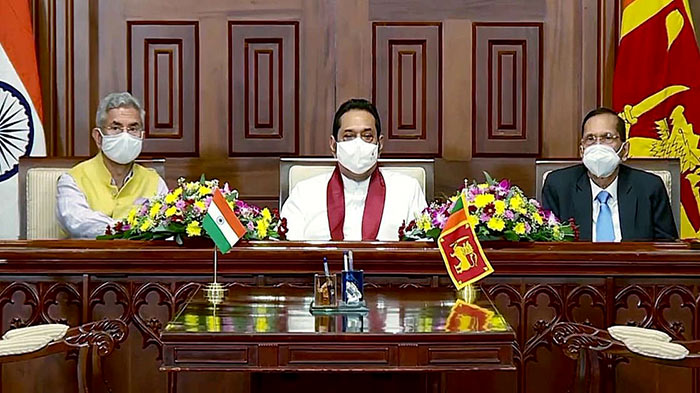 India-China rivalry in Sri Lanka has been playing out for years now but the unprecedented economic crisis in the island nation has given it fresh impetus. Over the last few months, New Delhi and Beijing have both been going out of their way to help Colombo through loans, credit lines and even medicines to ensure surgeries, hoping to gain more influence in return.

The island nation is in the throes of food and fuel shortages, power cuts, inadequate supply of medicines and other items.

Earlier this month, New Delhi provided Colombo with a $1 billion line of credit (LoC) for procuring food, medicines and other essential items.

While Jaishankar went to Sri Lanka mainly to attend the Bay of Bengal Initiative for Multi-Sectoral Technical and Economic Cooperation (BIMSTEC) summit and secure the country’s maritime domain, he even attempted to help with their daily needs, to give out the message that India truly believes in ‘Neighbourhood First’.

China is trying “to gain maximum advantage out of this crisis” and is “following up” on the measures that India is announcing, diplomatic sources told ThePrint.

The sources said that while New Delhi is mostly giving LoCs to help Sri Lanka, China is providing loans, which will be difficult for Sri Lanka to pay later.

On Tuesday, Jaishankar stepped in to resolve a crisis in one of Sri Lanka’s renowned hospitals – Peradeniya Hospital – where all surgeries had to be stopped due to shortage of medicines.

Disturbed to see this news. Am asking High Commissioner Baglay to contact and discuss how India can help.@IndiainSL #NeighbourhoodFirst https://t.co/jtHlGwxCBL

The Indian High Commission subsequently reached out to the Peradeniya University vice-chancellor in order to understand “their requirements for medicines to continue regular and scheduled surgeries”.

High Commission contacted Prof. Lamawansa, Hon. VC and the Dean of Medical Faculty of Peradeniya University and requested to know their requirements for medicines to continue regular and scheduled surgeries.

Jaishankar also visited the 1990 Suwa Seriya ambulance service in Colombo Tuesday, which he said has responded to 5 million calls to date.

Heartwarming to visit the 1990 Suwa Seriya Ambulance service in Colombo.

Impressed by your record and achievements: Responded to 5 million calls to date.

India is proud to be your partner in saving lives. pic.twitter.com/1HNhTP75q7

“The Indian External Affairs Minister assured the support of the Government of India to ensure economic stability in Sri Lanka, and reiterated that India understands the real issues of Sri Lanka being a close neighbour,” the Foreign Ministry of Sri Lanka said in a statement after Jaishankar’s meeting with his Sri Lankan counterpart G.L. Peiris.

While India is trying to help Sri Lanka tide over the current crisis, it is also ensuring that its interests in terms of the Tamil reconciliation and fishermen issues are effectively addressed.

During Jaishankar’s meeting with Peiris, the former was assured that the Sri Lankan government will work towards the Tamil reconciliation issue.

“Minister Peiris briefed Minister Jaishankar on the successful discussion the President of Sri Lanka and the Government had with the Tamil National Alliance (TNA, main Tamil party in Sri Lanka) last week, during which the President had acknowledged the concerns of the people of the North and East in terms of reconciliation,” the Sri Lankan Foreign Ministry’s statement said.

“Minister Jaishankar welcomed the positive developments that the Government of Sri Lanka has made towards resolving issues concerning Tamils in Sri Lanka and achieving (a) long-lasting solution,” it added.

At the BIMSTEC ministerial meeting, which took place Tuesday, Jaishankar spoke about cooperation between all members in connectivity, maritime security and countering terrorism.

A day after India announced the $1 billion LoC, China’s Ambassador to Sri Lanka Qi Zhenhong said that Beijing is considering a request from Colombo for a $2.5 billion assistance package, including a $1.5 billion credit line and $1 billion loan.

“Ambassador Qi, while stating that China had signed over 26 FTAs, expressed that finalising the proposed FTA between Sri Lanka and China would immensely benefit the Sri Lankan local market and products. He also urged the Sri Lankan authorities to resume the 7th round of FTA negotiations at the earliest,” said a statement issued after Qi’s meeting with Peiris last week.

The Chinese have also expedited some of their small and medium projects there, especially a few road projects in the rural provinces of the Indian Ocean island.

It even gifted 2,000 tonnes of rice worth $2.5 million to Sri Lanka last week to help address the growing food crisis there.

‘India can do more’

Sumith Nakandala, senior director, Bandaranaike Centre for International Studies, told ThePrint from Colombo that “India can do more” to help the country.

“Sri Lanka is in a state of major economic crisis. India has reached out with assistance, but this is not enough. It is important to understand that India can do more. India’s helping hand at this moment will strengthen our case. India will have to understand our problems. These are accumulated problems,” Nakandala said.

“We want India to expedite the projects it was handed over a long time back. For example, the LNG (liquefied natural gas) project that was given to India and Japan in 2017. The plan was to develop three power plants having a capacity of 100 MW,” he added.

“If that project was up and running today, we wouldn’t have faced such massive power cuts. Then there are long queues to get food and medicines. India can help us through the Food Corporation of India and SAARC food reserve.”

Nakandala said that China had also extended help, “but these are loans unlike a line of credit”.

“We do understand that countries have their own limitations and we have to do domestic arrangements in terms of cost of living adjustments, balance of payments, currency rate management etc,” he added.