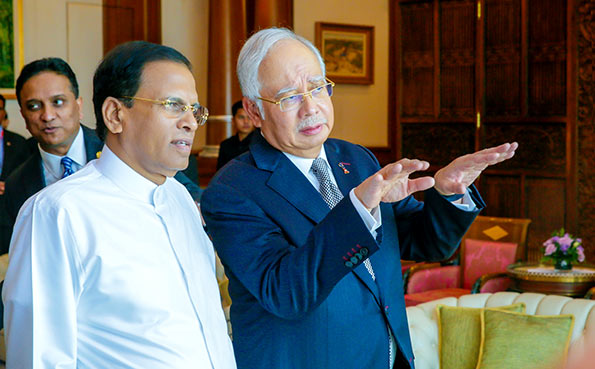 A colourful welcome ceremony was organised at the premises of the Prime Minister’s Office to welcome the President who was also accorded a Guard of Honour by the Armed Forces.

After being accorded a red carpet welcome by the Malaysian Prime Minister, the President was escorted to the Prime Minister’s Office for talks. Later, both the leaders held bilateral discussions. Five agreements were signed between the two leaders covering the areas such as foreign employment, youth development, tourism, culture and agriculture.

Expressing his views the President said that his prime expectations are to build reconciliation in the country and to create a stable and economically developed Sri Lanka.

President Sirisena said that the new agreements signed will pave the way to create new relations between the two countries in the fields of tourism, education, foreign employment and agriculture.

The President also suggested the Malaysian Prime Minister to introduce a new scheme to expand the educational opportunities to Sri Lankan students to study in Malaysia.

The President recalled his previous visit to Malaysia 9 years ago as the Minister of Agriculture and said that during that tour he observed the progress made by Malaysia in the field of agriculture and further said the Government expects the technical assistance of Malaysia to develop the Sri Lanka’s agricultural industry.

The Prime Minister pointed out that Malaysia has more opportunities for technical training. He also said Malaysia is ready to help Sri Lanka in that regard.

The two leaders also discussed about enhancing of tourism between the two countries.

President Sirisena, mentioning that this is a historic occasion when Malaysia made an official invitation to a Sri Lankan leader after 19 years, thanked the government of Malaysia for its invitation.

The President further stated that Sri Lanka will celebrate the 60th anniversary of the diplomatic relations between Sri Lanka and Malaysia. He also invited the Malaysian Prime Minister to visit Sri Lanka.