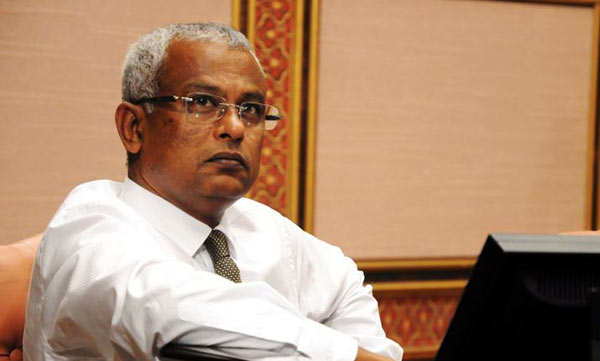 The Maldives government has acknowledged the opposition’s victory after the vote on Sunday, a surprise defeat for President Abdulla Yameen who was widely expected to win.

Results released by the Elections Commission on Monday morning showed Solih had secured 58.3 percent of the popular vote as opposed to the incumbent, President Yameen, who garnered 42 percent of the votes.

“We have won this election with a comfortable majority,” Solih told reporters in Male.

“I would like to call upon President Abdulla Yameen and ask him to respect the will of the people and to immediately begin the smooth transition of power.”

The US State Department has congratulated voters for raising their “democratic voices” and urged the country’s leaders to respect the outcome.

“We urge calm and respect for the will of the people as the election process concludes,” the State Department wrote in a Tweet.

Celebrations broke out across the tropical archipelago with opposition supporters carrying yellow flags of Solih’s Maldivian Democratic Party (MDP) and dancing on the streets. There was no response from Yameen after results were announced.

Earlier in the night, after early results showed a strong lead for the opposition, Ahmed Nihan, a senior ruling party official, told Al Jazeera that while it was too early to declare a winner, the Progressive Party of the Maldives “has the courage to accept the citizen’s say, regardless of whether we win or lose”.

“We have proved we are capable of facilitating an orderly vote,” said Nihan, adding that the opposition’s claims of vote rigging prior to the election were “baseless”.

Sunday’s election, considered a referendum on democracy in the troubled island nation, saw Solih run against incumbent president Yameen who sought re-election with a pledge to boost Maldives’ economy after a first five-year term marred by allegations of rights abuses and corruption.

More than 250,000 people in the Maldives, out of a population of 350,000, were eligible to vote in Sunday’s election. Voting was also taking place in Kuala Lumpur and Sri Lanka.

Following Solih’s speech, jubilant supporters celebrated on social media as well as the streets of Male.

Hundreds gathered in front of the opposition’s campaign office despite heavy rain, congratulating each other and exchanging hugs.

Aishath Sheeza, 50, who said she was arrested several times for protesting against Yameen’s government, was “euphoric”.

“I have suffered in jail. I have been detained and beaten unjustly,” said Sheeza. “I feel so much tonight. I just want to celebrate.”

Watching results on national television in the Maldivian capital, Male, Dhahau Naseem said she was “ecstatic”.

“Perhaps there is no way out for Yameen this time,” said Naseem who was “scared of being optimistic about positive results” ahead of the election.

This was “given Yameen’s refusal to tolerate any dissent in the past”, according to Naseem who was referring to the president’s declaration of a state of emergency in defiance of a Supreme Court ruling in February, which ordered the release of jailed dissidents.

The emergency decree was Yameen’s second in five years. Within hours of the declaration, security forces arrested two out of the five top court judges on charges of plotting a coup.

The three were later jailed on charges of obstructing justice.