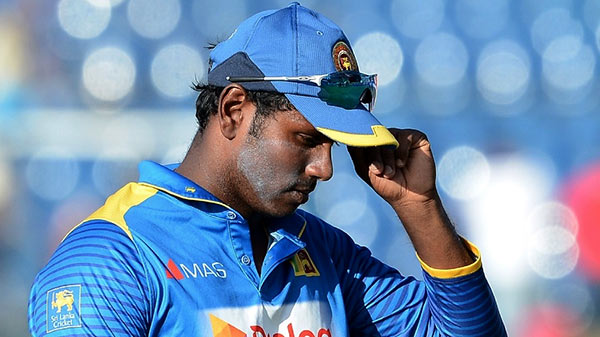 Angelo Mathews feels he has been ‘betrayed and let down’ after he was asked to resign from the captaincy taking full responsibility for the Asia Cup debacle.

Mathews who tendered his resignation last night from the captaincy says he is even willing to retire from limited over cricket if the selectors and the coach believe he is unfit to play ODI and T20 cricket.

His sacking comes in the aftermath of a disastrous Asia Cup campaign where Sri Lanka made a first round exit, losing both their matches to Bangladesh and Afghanistan. The decision was widely expected after Sri Lanka team had hit significant lows under Mathews since being reappointed as skipper. Sri Lanka Cricket said the selectors and the coached requested the former all-rounder to step down.

The defeats came as a rude shock for the islanders who are struggling to find their feet after a series of defeats in 2017.

“Though I was initially surprised, it was immediately felt that I have been made the scapegoat in this entire saga of Sri Lanka’s dismal performances against Bangladesh and Afghanistan in the Asia Cup, I am willing to take part of the blame but at the same time, feel betrayed and let down if the blame solely put on me,” Mathews wrote to Ashely de Silva.

With the World Cup fast approaching and a heavy international schedule ahead, Sri Lanka now require a great deal of soul-searching to be a competitive outfit in white-ball cricket before the 1996 World Champions become a laughing stock in the world—if they aren’t that already.

Sri Lanka had come to the tournament with renewed hopes after winning back-to-back matches against South Africa at home but the players were all at sea against a vastly improved Afghan outfit who put on a spirited effort, first with the bat, then with the ball, recording a historic win. This was Sri Lanka’s worst ever performance in the Asia Cup.

“As you know all decisions are taken through a mutual understanding with selectors and the Head Coach. And though I do not agree with the reasoning that the losses should be accrued single handed to the Captaincy. I however eagerly and wholeheartedly respect the request of the selection committee and the head coach in asking me to down and to do so with immediate effect. You would recall that I relinquished my captaincy in all formats in July 2017, pursuant to captaining Sri Lanka continuously for a period of 5 years in all formats. During this tenure under my captaincy series wins were recorded against England, we whitewashed Australia 3-0 and winning the Asia Cup in 2014 were some memorable occasions,” the letter stated.

Mathews says he had no intention run away from the responsibility with the world cup around the corner despite the Asia Cup debacle.

“I wish to put it on record that though Sri Lanka had suffered these heavy defeats in the Asia Cup, which is shocking to say the least, especially in the backdrop where we had a reasonable series against South Africa. I had no intention to quitting and running way from the issues at hand especially owing to the World Cup being only a dozen games away,” the letter reads.

The decision was made last night when the selectors and coach met to decide the Sri Lanka squad for the five-match ODI series against India.

Last year Mathews stepped down as Sri Lanka captain in all three formats, following his side’s 3-2 ODI series loss to Zimbabwe but was reappointed in January this year when Chandika Hathurusingha took over as Sri Lanka coach. But there have been significant lows under Mathews.

Mathews’ captaincy was characterised by injury during the last two years. He missed two Tests and an ODI tri-series in Zimbabwe as a result of multiple leg injuries in 2016. He was absent for a five-match ODI series against South Africa when he returned home to a torn hamstring. He also missed Bangladesh’s tour of the island. He also missed the tri-series in Bangladesh which Sri Lanka won. Since returning to the side, Mathews has struggled with the bat but it was his leadership that has come under heavy criticism.

“Furthermore as an obligation of a player, I will keep working hard in all aspects of the game and will be available to represent Sri Lanka at any given time with my fullest. I also believe that if the selectors and coach are of the view that I am unfit to play ODI and T20 cricket and thus not entitled for my place in the team,  I would also consider retiring  from the ODI and T20 formats as I never want to  be a burden to the team,” the letter adds.

“I have played the game true to my  conscience best at all times and have felt that I’ m fit enough to play the formats and also have performed adequately over a period of time to hold my place in the team. “You will also note that I was also the overall highest run scorer in the South Africa series from both teams. In the given circumstances I thus resign as the Captain of the Sri Lankan ODI and T20 team with immediate effect in considering the request of the selection committee and the head coach to resign. I thank the selectors and the National Coach for speaking to me in person and conveying your thoughts in respect of the Asia Cup and giving me the opportunity to step down in this manner,” it further adds.

5 Responses to Sacked Mathews feels ‘betrayed and let down’