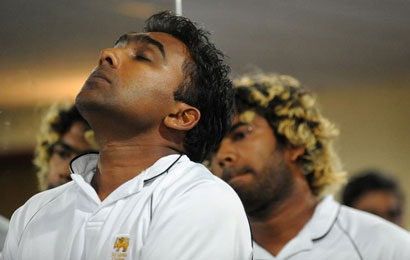 Jaipur Former Sri Lankan captain Mahela Jayawardene feels speedster Lasith Malinga has taken the right decision in bidding adieu to Test cricket and said it would help his dream of playing in the 2015 World Cup.

The Kochi Tuskers Kerala skipper said Malinga has been suffering from this injury for quite some time and quitting Test cricket would help his dream of playing for Sri Lanka in the World Cup 2015.

The 33-year-old also dispelled the notion that Malinga’s decision was prompted by comments made by a section of the Sri Lankan cricket administration regarding his participation in IPL while declaring himself unfit for the country’s upcoming Test tour of England.

“I feel he has taken the right decision after pondering over all aspects. He has been suffering from this knee injury for quite some time,” Jayawardene told reporters on the eve of their IPL match against Rajasthan Royals.

“I know when I was the captain we used to try and calculate his work load and used him accordingly. At times it used to flare up and once he was away from cricket for 16 months.

“In order to extend his career he has to quit Test cricket. In fact his target is next world cup in 2015 and by bidding adieu to Tests he has prolonged his career in shorter version of the game.

“He had worked hard and made a fine comeback and is performing brilliantly. He has realised that he can’t sustain that huge work load and perhaps has prolonged his career. I am very happy for him,” said the Sri Lankan skipper.

Fleming not ready yet

former New Zealand captain Stephen Fleming  said he had not thought of taking up full-time coaching job yet.”I’m enjoying coaching Chennai Super Kings. I got my hands full at CSK. It is a good experience.

I haven’t thought a lot about my coaching career. It is something that I’ll consider as time goes on,” Felming said.

A few sections of the media had reported that Felming was one of the candidates to coach the Indian team.