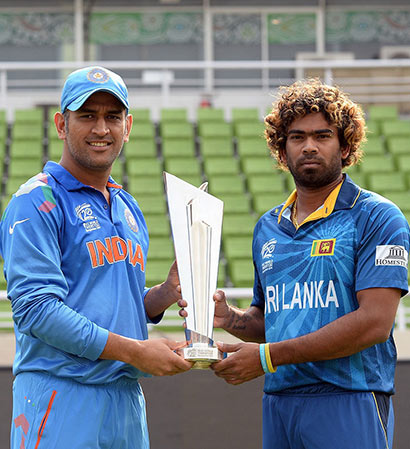 Sunday’s (today) final against India will be the last Twenty20 international for both former captains who have played a combined 265 Tests and 781 ODIs, totalling 46,000-plus international runs.

Against India, Sri Lanka now have an opportunity to better their dismal final record in a global competition, having been beaten in the title showdown of the 50-over World Cup in 2007 and 2011 and at the World Twenty20 in 2009 and 2012.

Malinga sounded determined to make sure the departing duo tasted a World Cup triumph before their exit from Twenty20 internationals.

“We all know they are great players of international cricket,” Malinga told reporters.

“I’m the captain now (and I’m) very happy to be in that position. They’ve helped the young players, (including) myself.

“We are looking forward to do our best for these two.”

“They’ve served Sri Lankan cricket for a long time through all formats… Sri Lanka will miss their presence in the dressing room,” Dhoni said.

“They have between them in excess of 650 ODIs and lot of Test matches. They got fair bit of experience and Sri Lanka will miss that.

“But every good thing comes to an end, they will have to get over it and get someone to fill this space.”

Malinga confirmed he would lead Sri Lanka in the final even if regular Twenty20 skipper Dinesh Chandimal, replaced by Lahiru Thirimanne in the last two matches, returns to the playing XI.

“Chandimal is a good captain and played a few matches. We all know he is an up-and-coming good player. (But) I think Lahiru Thirimanne had grabbed his chance and proved how good he is,” Malinga said.

Sunday’s conTest may eventually boil down to a battle between India’s in-form batsmen and the Sri Lankan bowlers, who would have to find a way to silence Virat Kohli whose red-hot form has made him the tournament’s top scorer.

“We all know he is a great player. (To dismiss) every great player, a bowler needs just a single ball,” Malinga said.

“I have a good feeling about me and my team that someone from my side will bowl that ball tomorrow.

“We need to plan for full 20 overs. They have six-seven good batsmen and we have to think about them all. We won’t think about a particular batsman we have to get out. We need to bowl good 20 overs,” added the maverick paceman with blond-tinted hair and a sling-shot action. (thenews.com.pk)