Minister advises Met Dept: Warn risky situations even if 100 pc not sure 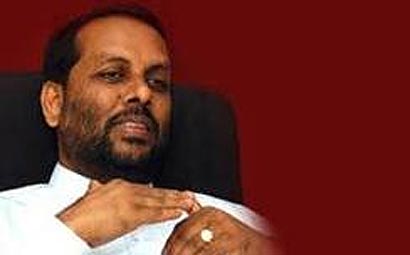 Disaster Management Minister Mahinda Amaraweera said he advised the Meteorology Department to issue warnings hereafter when there is some probability of a risky situation, even if the Department cannot be 100 percent sure, and not underestimate the danger posed to the lives of people.

The minister said that a complete restructure is needed in the Met Departmentww and the entire network of its communication including the Disaster Management Centre (DMC), the Fisheries Ministry and Media institution. He observed the entire mechanism to warn people should be more effective. He advised the Met Department to issue weather forecasts in a detailed and simple manner that even an ordinary person can understand.

The minister made these observations addressing a special press conference at the Met Department auditorium yesterday. He said there had been a fault somewhere in the process of communicating the message on adverse weather prevailed on Friday night to the fishermen. He was of the view that the responsibilities of many parties had been missed during that tragedy. Amaraweera said the special committee appointed by the President to look into the incident would decide where the lapse had actually occurred as there are controversial statements from various parties.

The minister said as of the report he obtained through the Ministry Secretary, the Met Department had communicated the message to the Fisheries Ministry at 4.00 pm on Friday by a fax communique, but it had denied of its receipt.

He said when he inquired about this fax from the Telecom, it confirmed the transaction. He said it is up to the committee to look into this information and discover the truth. He said the ministry does not cover up any official, adding that if proved guilty he is ready to take stern action against them.

Amaraweera said he also instructed the Met Department to reserve few officers to closely coordinate with media as this task is presently undertaken by the Meteorologists themselves. Met Department Deputy Director S. R. Jayasekara said, as Sri Lanka is an island and located in the equatorial belt, it is difficult to make precise predictions on the changes in atmosphere, unlike in countries like the US in which slow moving weather systems are prevailing. He said the weather phenomenon occurred on Friday night, which is referred to as “low level jet stream”, cannot be predicted beforehand, specially before 12 hours, with greater degree of accuracy.

However, the Deputy Director said the department was aware of the risk, and accordingly mentioned it on its forecast at 4.00pm on Friday. He said in it they predicted strong southwesterly winds up to 80 Km per hour and requested Naval and fishing communities “to be vigilant as deep and shallow sea areas off the coast extending from Mannar to Pottuvil via Colombo and Galle will be rough”.

He noted there is a shortage of meteorologists in the Department as the approved cadre is 34 and only 17 are working. He also said even though the approved number of technical officers is 208 only 131 are working. However, he observed the lack of technological or human resources did not contribute to this particular incident as it was a sudden change in atmosphere.

Responding a question by a journalist, DMC Director General Gamini Hettiarachchi said they received the Met Department weather bulletin at 4.00pm on Friday, but as it was just a forecast and not a warning did not pursue further measures except passing the message to officers in the district coordination units. Met Department Director General S. H. Kariyawasam, Director Lalith Chandrapala and Ministry Secretary S. M. Mohamed also participated.

Home » Minister advises Met Dept: Warn risky situations even if 100 pc not sure