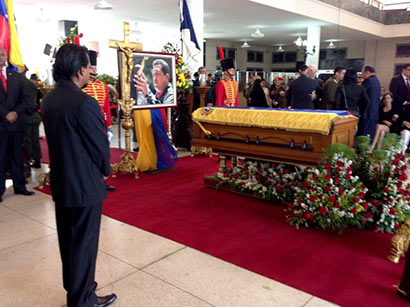 The Minister of Construction, Engineering Services, Housing and Common Amenities, Wimal Weerawansa and the Deputy Minister of External Affairs, Neomal Perera together with Sri Lanka`s Ambassador to Cuba (with concurrent accreditation to Venezuela), Sarath Dissanayake   represented the President, the Government and people of Sri Lanka at the State Funeral of the late President Hugo Chavez of Venezuela on 8th March 2013 in Caracas.  On arrival at the Caracas Airport on 7th March, they were met by Vice Foreign Minister of Venezuela, David Velasquex  Caraballo.

On the 8th March, the Sri Lankan delegation paid their last respects to the late President Hugo Chavez whose body lay in state at the Military Academy in Caracas and participated at the State Funeral amidst a large gathering of foreign dignitaries. They also conveyed the deepest condolences of the President, the Government and people of Sri Lanka to the Acting President of Venezuela, Nicolas Maduro and the family members of the late President.  The Venezuelan Government has declared a 7 – day state mourning as a mark of respect to former President.

The Sri Lankan delegation was also invited to the swearing in ceremony of Vice President Nicolas Maduro as the Acting President of Venezuela at the National Assembly on 8th Evening. They also had a meeting with Vice Minister of Foreign Affairs, David Caraballo prior to departure on the 9th March. 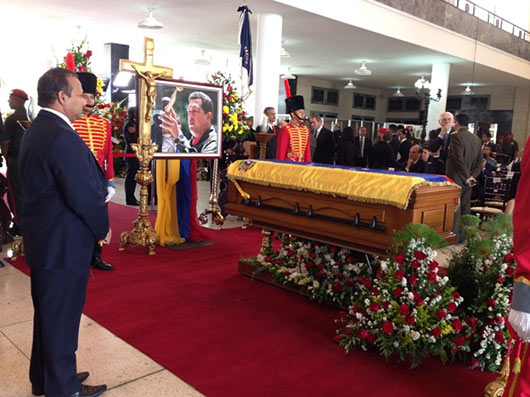