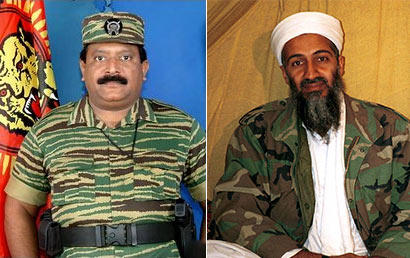 There is little doubt that both Prabakaran and Osama were leaders of 2 terrorist groups – feared and abhorred. Prabakaran headed the LTTE (Liberation of Tamil Tiger Eelaam) whilst Osama headed the Al Qaeda. Prabakaran’s death was announced on 18th May 2009 while Osama was killed on 2 May 2011. Sri Lanka is currently facing a plethora of allegations following its decision to apply a Just War situation and take on the armed non-State actor – LTTE after suffering 30 years of LTTE terror attacks. The photo of Prabakaran’s son with bullet wounds but without blood and a film documentary funded to be screened annually every time there are Geneva sessions has taken center stage of the UNHRC. There was no film however when 23 US Navy Seals invaded a sovereign nation and killed Osama, the unarmed Al Qaeda leader and his unarmed son watched by the US President, his Vice President, the US Secretary of State and the US military heads. The killing of Prabakaran’s son is only an allegation – the killing of Osama’s unarmed son was watched by the entire US military and State establishment – we would like to know the reason behind the double standards for Sri Lanka? Was killing an unarmed man not an assassination to which accomplices included those in the White House watching the murder – though the world is a better place now without both Prabakaran and Osama bin Laden!

Osama’s son was 18 years while Prabakaran’s son was 12 but both sons were son’s of two terrorists. Prabakaran’s son’s death is plagued in intrigue and whatever forensic evidence is made looking at a photograph or the stories relayed looking at a picture of him munching a biscuit in an underground fortified bunker cannot attribute his death to that being committed by the Sri Lankan forces. Looking at two pictures and determining that the Sri Lankan army killed the terrorist’s 12 year old son is unacceptable in any court of law.

However, in the case of Osama bin Laden the raid by the US Navy seals was undertaken in secret and Osama and son with several others were killed whilst they were unarmed and whilst the President of the US and his heads watched live. These clippings would be available with them though classified. Osama was hiding in the city of Abbotabad/Pakistan.

“Geronimo EKIA” was the message to confirm Osama’s killing. The orders were to kill Osama not capture him but the excuse given was “some threatening moves were made that clearly represented a clear threat to our guys. And that’s the reason they fired”. In the case of Prabakaran, the LTTE was offered several opportunities to lay down their arms and surrender which they chose not to do and even the UN Panel of Expert report says that the “Tigers kept on fighting even when it became clear they had lost in order to save the lives of its leaders. This futile prolonging of the conflict resulted in many civilians dying unnecessarily”.

Sri Lanka’s military did not flout international laws by invading a sovereign nation yet the US Navy seals entered Pakistan without the knowledge of the Pakistani Government. When Sri Lanka announced the elimination of the LTTE ground force and declared the country was free from terrorism the UN Secretary General demanded that Sri Lanka refrain from “triumphalism” when Osama’s death was announced there were celebrations worldwide and cries of “We are the champions”. “The bin Laden operation was a landmark achievement by our country, by our military, by our Intelligence Community, and by our Agency,” said the acting Director of the CIA, Michael Morell.

Ironically, both Prabakaran and Osama were almost the same age at the time of their deaths – Prabakaran was born on 24 Nov 1954 while Osama was born on March 10, 1957.

A year after US President says that Osama’s killing was “the most important single day” of his time in the White House—and the daring Navy SEAL raid that ended the al-Qaida chief’s life was “the longest 40 minutes of my life.” (2 May 2012).

Whilst the President of the US was all the while worried about the US troops “I really want to get those guys back home safe” Sri Lanka’s President is being questioned on allegations of civilian deaths where 4 years on apart from 600 or so people claiming that 3000 are missing, Sri Lanka is ordered to take responsibility for the deaths of some 40,000 to 125,000 civilians when there is no kith to even come forward to name these so called “executed” civilians. Can those who are making these allegations at least produce evidence that 40,000 to 125,000 were born in Sri Lanka?

What is also baffling is that whilst the Sri Lankan army declared it was militarily taking on the LTTE but also gave the LTTE the opportunity to lay down their arms and give themselves up which they did not do, the Sri Lankan army cannot be faulted for proceeding. The Sri Lankan President would have wanted to see “his guys” back home safe too.

What also needs to be clearly articulated is that on each occasion that the LTTE was asked to release the civilians the LTTE, their LTTE fronts overseas and LTTE supporters claimed the people were with them voluntarily. When IHL is in force in an armed conflict all civilians taking part in hostilities lose their right to protection as civilians yet despite this reality the Sri Lankan army saved approximately 295,000 civilians who had not eaten for days, evidence of how well the LTTE, their saviors had looked after them!

If Charles Wolf whose wife died in 9/11, 2001 rejoiced at the death of Osama “I am really glad that man’s evil is off this earth forever….that his death was long overdue” – is it wrong for the people of Sri Lanka to voice the same jubiliation given that we have a greater right having suffered 30 years of LTTE terror whilst the US suffered just one single event?

· The US says it was on a War with Al Qaeda – cannot Sri Lanka say the same of LTTE?

· If US views Osama as a combatant – Sri Lanka has every right to do the same.

· If US views Osama a mass murderer – Sri Lanka has far more right to view Prabakaran and the LTTE as such. We have 30 years of terrorism and deaths to prove so.

· US argues that whether Osama had a gun or not – it was lawful to kill a combatant. Where would Sri Lanka’s case be different?

· If the US Attorney General Eric Holder can tell the US Senate Committee that the US Navy Seal operation was legal – Can Sri Lanka’s Attorney General say the same? For 9/11 which was carried out not by any Afghans, Afghanistan was attacked and US invaded Pakistan’s sovereignty and killed an unarmed enemy commander citing Yamamoto in World War 2 who was shot down. What would Sri Lanka’s position be?

What would Callum MacRae, Channel 4, HRW, Gordon Weiss, Frances Harrison and scores of others have to say about a Whitehouse official saying “we have been happy just to get the son. It’s a real bonus to get them both”. Prabakaran’s son’s death being attributed to the Sri Lankan army based on a photograph is nowhere alarming as that of an 18year old unarmed Osama’s son being killed in a sting operation that invaded the sovereignty of a nation and carried out whilst being relayed live to the President of the US and all of his national security team.

There is something amiss here. We would like to know why all these double standards are being set on a country as Sri Lanka?