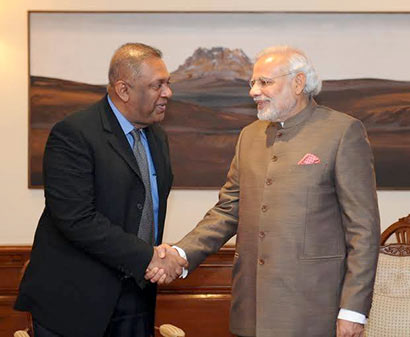 With a new government taking office in Sri Lanka, Prime Minister Narendra Modi may travel to Colombo in March. If he does go, it will be the first state visit by an Indian PM since Rajiv Gandhi’s trip in 1987.

Speaking to journalists after his first visit in his new capacity, Sri Lanka’s new foreign minister Mangala Samaraweera said, “The new government wanted to demonstrate importance of restoring friendly ties with our neighbour.” Samaraweera said external affairs minister Sushma Swaraj would travel to Sri Lanka for the joint commission meeting in February. This would be followed by the first visit to India by new Sri Lankan President Maithripala Sirisena.

Describing the regime change in Sri Lanka as its “own version of the Arab Spring”, Samaraweera said the transition was not as easy as it might appear. The images of Mahinda Rajapaksa waving goodbye to his staff at his official residence was greeted with relief that the departing strongman had accepted the people’s verdict.

Samaraweera said Rajapaksa was attempting to conduct a “coup” by imposing an emergency. “But our armed forces stood by us,” he said adding a full inquiry would be conducted into the events of that night.

The foreign minister promised to revisit the mammoth port city projects by China. This assurance was given by new Prime Minister Ranil Wickremasinghe too.

He also promised a domestic investigation and inquiry into alleged human rights violations in the last months of the war against the LTTE in 2009. The Rajapaksa government had several run-ins with the UN Human Rights Council on this issue. Samaraweera said their government was leaning towards having a domestic mechanism with international support, something that India would be happy to endorse.

The Sirisena government, the foreign minister said, intended to abolish the executive presidency, by essentially repealing the 18th amendment. On the 13th amendment though he was a lot more careful. He said they would return land to Tamils as well take a slew of other steps, which he said would not need the 13th amendment.

All the parties in the coalition would have a forum under the leadership of Chandrika Kumaratunga, tentatively called the National Executive Council, TOI reports.