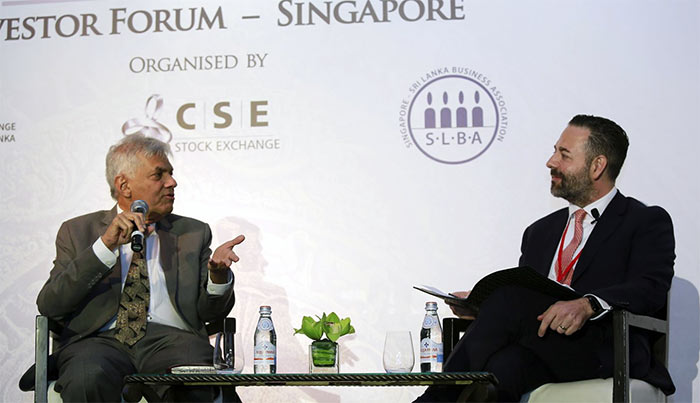 Prime Minister Ranil Wickremesinghe says that Sri Lanka’s National Unity Government has come to stay and no future administration would scrap the concept.

Answering questions after delivering the keynote address at the “Invest Sri Lanka” Forum held in the Four Seasons Hotel on Friday, Wickremesinghe said that even though a section of the Opposition was highly critical of the National Unity Administration that was formed in January 2015, the positive benefits of such an arrangement from a country perspective far outweighed whatever perceived negatives there may be.

Admitting that the UNP-SLFP-led alliance had faced turbulent times, he pointed out that when the country’s two main parties had for the first time been brought under one banner, there were bound to be issues.

“Look at Germany. National Government’s are shaky. But once established and taken root, it will not be scrapped, no matter who comes to power,” he said.

Earlier in his keynote speech, Wickremesinghe told a full house that included Singapores Minister of Trade and Economic Cooperation S. Iswaran and a large number of international fund managers that several policy measures aimed at incentivizing direct private investment from foreign and local sources would be implemented in the coming months.

He said that enabling legislation was in the preparatory stage and the gallery would be launched by mid-year, exhibiting the government’s commitment to ease doing business.

“The time taken to register a new business will be reduced from six days to just one. Period of registering property halved from 51 to 26 days and procedures reduced from nine steps to two. An Electronic Single Window will also be introduced linking dozens of state agencies dealing with international trade via a few clicks.”

Through the new Colombo International Financial City, the present Port City project, a unique business climate that was globally competitive had been created. This new city would function as a special economic zone and adopt a conducive and transparent regulatory system. It would also provide an environment for foreign companies, like no other in the region, the Prime Minister emphasized.

These efforts, he said, were being complemented with comprehensive trade policy reforms that had seen the scrapping of protectionist para-tariffs on over 1,200 items with the rest slated for removal this year and in 2019.

Wickremesinghe expressed confidence in Sri Lanka’s ability to leverage on its strategic location and expand market access with a diverse group of countries such as the United States of America, European Union, India, China, Singapore, Indonesia, Japan, Malaysia and Thailand.

The investor forum organized by the CSE, in collaboration with SEC, Singapore-Lanka Business Commission and Singapore Business Federation, was a sequel to the modern and comprehensive Free Trade Agreement that was signed between Sri Lanka and Singapore in record time recently with the Prime Ministers of both countries present.

1 Response to National Government has come to stay – PM