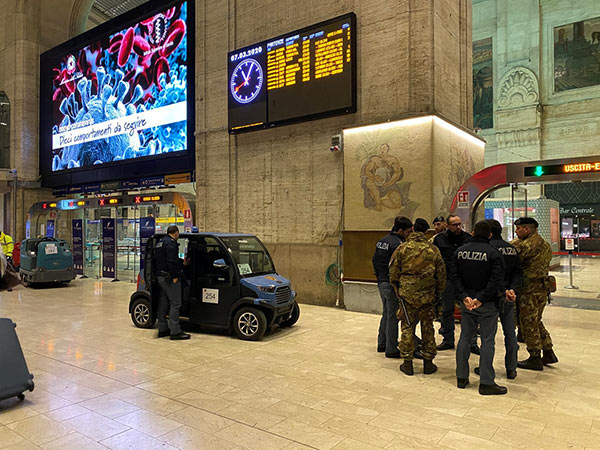 Italy’s prime minister has said at least 16 million people are in mandatory quarantine in the Lombardy region and also in 14 provinces.

The lock-down will last until early April.

The dramatic escalation in the country’s efforts to contain the new coronavirus will close gyms, pools, museums and ski resorts.

Italy is Europe’s worst-hit country and reported a steep rise in virus infections on Saturday.

The new measures, which also apply to the financial centre Milan and tourist hotspot Venice will last until 3 April.

The death toll in Italy has passed 230, with officials reporting more than 50 deaths in 24 hours. The number of confirmed cases jumped by more than 1,200 to 5,883 on Saturday.

The whole northern region of Lombardy, home to 10 million people and Italy’s financial centre Milan, will be closed off except for emergency access, and 14 provinces including Venice, Parma, and Modena will be subject to the same measures – affecting a total of around 16 million people.

Until now only around 50,000 people in northern Italy had been affected by quarantine measures.

What are the measures?
Night clubs, gyms, swimming pools, museums, and ski resorts will be closed.

Restaurants and cafes can open but customers must sit at least a meter apart.

People will be told to stay home as much as possible, and those who break the quarantine could face three months in jail.

Sports competitions will close to the public, and the president of Italy’s football players’ union has called for all matches to be postponed.

The World Health Organization has advised Italy to strongly focus on virus containment measures as infections spread in the country.

The plans echo China’s forced quarantine of millions of people which the WHO has praised for halting the spread of the virus.

Leading Italian politician Nicola Zingaretti said on Saturday he had tested positive for the virus.

“I am fine but I will have to stay home for the next few days,” the leader of Italy’s center-left Democratic Party (PD) said in a Facebook post.

The country has said it will start recruiting retired doctors in an effort to combat the escalating outbreak.

‘Highest priority’
Elsewhere, Iran has confirmed almost 6,000 infections and 145 deaths, and the number of cases worldwide has passed 100,000, officials say.

A second MP was reportedly among those to have died in Iran, where health officials fear the number of cases may actually be much higher.

There have so far been nearly 3,500 coronavirus deaths recorded worldwide. The majority have been in China, where the virus originated in December.

The head of the World Health Organization (WHO), Tedros Adhanom Ghebreyesus, has called the spread of the virus “deeply concerning” and urged all countries to make containment “their highest priority”.

– A hotel used as a coronavirus quarantine facility in the Chinese city of Quanzhou collapsed – 47 of 70 trapped people have been rescued so far
– Pope Francis is to deliver Sunday’s Angelus Prayer by livestream to avoid the usual crowds forming
– The Women’s World Ice Hockey Championships in Canada have been canceled
– In Saudi Arabia, access to the sacred Kaaba in Islam’s holiest site Mecca remains blocked

What’s the latest on cases globally?
On Sunday South Korean officials said 367 new cases were reported in the past day, bringing the total cases in the country to 7,134.

China reported its lowest number of new infections in a single day since January.

There were 27 new deaths there from the virus, which were all in Wuhan where the outbreak began.

In Iran, 21 people are reported to have died as a result of coronavirus in the past day and more than 16,000 people are being tested in the country.

The WHO’s representative in Iran, Dr Christoph Hamelmann, said Iran was making tremendous progress at its hospitals, with facilities made available for treatment in every province.

In the US a cruise ship with 3,533 passengers and crew are being held off the coast near San Francisco after 21 people tested positive for the disease.

In New York cases jumped from 44 on Friday to 76 and Governor Andrew Cuomo declared a state of emergency.

In Australia, a man in his 80s became the third person to die there from the virus.

More than 80,000 people have been infected with coronavirus in China since its emergence in the city of Wuhan, Hubei province.