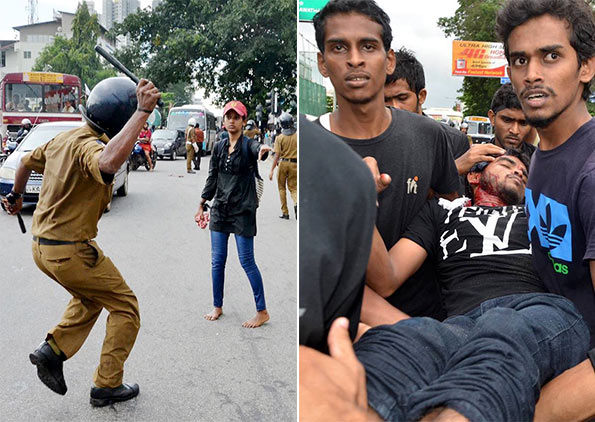 The National Police Commission has launched an inquiry into the assault on Higher National Diploma in Accountancy (HNDA) students by riot police this Thursday (29), said its Secretary N. Ariyadasa Cooray.

The assault left at least 70 students with minor injuries, while 10 with severe wounds were admitted to the National Hospital.

Over 500 students marched from Colombo Fort to the Ministry of Higher Education at Ward Place demanding authorities to re-recognize their course as equivalent to the BCom Degree offered by State-run universities in the country.

HNDA conducted by the Sri Lanka Institute of Advanced Technological Education (SLIATE) was considered, till last year, as an alternative to the BCom Degree. Meanwhile, condemning the attack, the Free Media Movement (FMM) stated they consider the attack a “gross violation of the right to protest, which is one of the major channels to achieve rights by civilians.”

“This incident reminds us of the refractory past when peaceful meetings, freedom of expression and protests to gain rights were brutally suppressed. It also creates a negative picture of the country as a State which neglects global human rights standards,” the FMM stated, demanding an impartial investigation into this attack from President Maithripala Sirisena and Prime Minister Ranil Wickremesinghe.

Also expressing their concerns over the attack, the Asian Human Rights Commission (AHRC) in a statement said, “Now that the National Human Rights Commission and the NPC have been appointed, it is their duty to conduct a thorough inquiry into this particular incident and take appropriate action against those who have violated the law.”