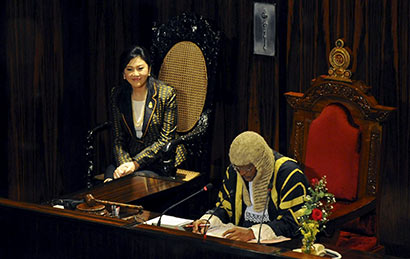 The Sri Lankan people have always shown great courage in protecting their nation and the value of their democracy. On a personal level I am deeply honoured to be addressing the same Parliament where the world’s first female Prime Minister Sirimavo Bandaranaike once led the government,” Thai Prime Minister Yingluck Shinawatra told Parliament, Friday (31).

Yingluck Shinawatra, who arrived in Sri Lanka yesterday for a two-day official visit aimed at strengthening bilateral relations, is the 8th foreign state leader to address at the Sri Lankan Parliament.

Shibawatra addressing the Sri Lanka Parliament further said that Thailand and Sri Lanka must work together to strengthen Budhism as a religion and way of life.

“Ayubowann, Wanakkam, I am excited to speak for the first time in this Parliament after 10 years my brother, the second Prime Minister of Thailand. It is a great pleasure for me to be in Sri Lanka, a beautiful island nation at the opposite end of the Bay of Bengal,” she said.

“Although we are separated by an ocean our two countries share common religious faith, and close cultural and political beliefs. I feel privileged to speak to the elected representatives of the people of Sri Lanka.

“I am here in Sri Lanka with the intention to build a closer partnership between our two nations, and to seek Sri Lanka’s support in building a bridge of multi-dimensional cooperation throughout Asia. In the religious dimension, the reference of Thai word ‘Lanka wong’ carries a noble meaning for Thais,” the Thai Prime Minister said.

“It showed the establishment of Buddhism from Sri Lanka to Thailand some eight centuries ago, and 260 years ago a group of monks from Thailand gifted higher ordination to Sri Lankan monks. These eventually led to the establishment of the Siam Maha Nikaya here in this country. This made our Buddhist unilink que and this is the reason why our people are so firmly connected. More importantly, with rapid changes in the world with economic capitalism, political turmoil and social disruption these days we must work together to strength Buddhism as a religion and a way of life. I would like to ask you all to join this quest so that, Buddhism can be a force to bring peace not only to the individual minds but also for human communities as a whole,” she said.

“The world is facing the common threat of climate change and natural disasters. Our countries shared the fate of tsunami in 2004.

Thailand had to face one of the worst floods in our nation’s history two years ago. As climate change threatens human security we need to work to protect our people by reducing risks from natural disasters. I call for a closer corporation and collaboration with an action plan to coordinate a warning system and disaster relief operations,” Shinawatra said.

“Democraxy is an internal affair of one country alone. Democracies around the world must join to protect the people. Our two countries with our experiences and lessons can contribute greatly to the advancement of democratic forces,” she said.

“In the economic dimension, Asia is home to about 60 percent of the world’s population and contributes heavily to the global economic growth. Enhanced regional connectivity will strengthen the link in the Indian Ocean.

This is a strategy being pursued by Thailand and ASEAN. We are building better transport links in ASEAN countries and other regions including South Asia. On Thailand’s part we are investing US$ 66 million in infrastructure development that will link up with the region. Better connectivity leads to more trade, investment, tourism and better links with people.” 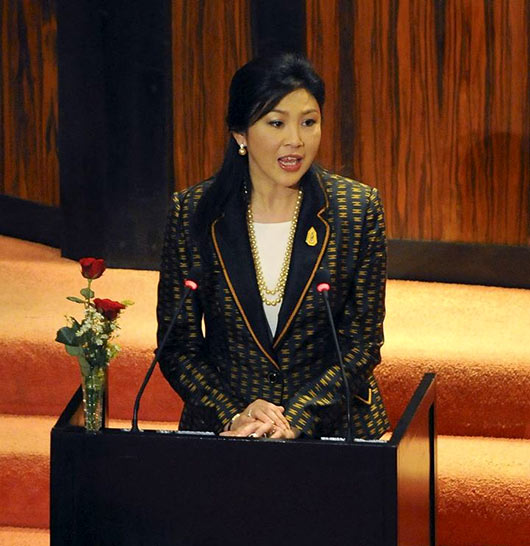