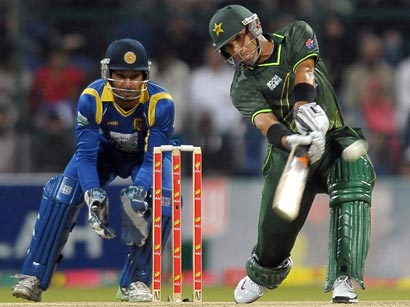 ABU DHABI — Pakistan beat Sri Lanka by five wickets in a thrilling finish to the only Twenty20 international played at Abu Dhabi stadium here on Friday.

Chasing a modest total of 142, Pakistan looked in a bit of trouble put a calm and composed 48 not out by Misbah sealed the victory for the hosts.

Earlier, after a decent start Sri Lankan batsmen crumbled like ten-pin against a formidable Pakistan bowling line-up to end up with a below avg. score of 141 in the T20 fixture on Friday.

Aizaz Cheema, who was taken for plenty in the first over came back well to bag three wickets in one over to finish with an impressive tally of 4-0-30-4 at an economy of 7.50.

Saeed Ajmal was the most economical bowler as Sri Lankan batsmen were in all sort of trouble trying to figure out the offie.

For the islanders Dinesh Chandimal scored 56 runs off 44 balls to hold the Lankan innings together.

Captain Tillakaratne Dilshan has not enjoyed a good series so far and seemed intent to set things right in front of a vociferous Abu Dhabi crowd with some cracking shots and along with Upul Tharanga who bludgeoned two consecutive boundaries of Gul gave Sri Lanka a rather good start.

At one stage they were cruising with a run rate of 9 and only three wickets down. But saeed Ajmal opened the floodgates with the wicket of Dilshan.