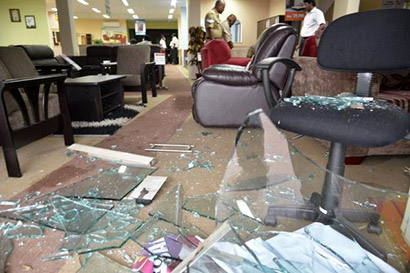 (The windows of a showroom dealing in Sri Lankan furniture in Coimbatore were damaged in stone-throwing on Friday. Photo: K. Ananthan)

Burying their differences, political parties in Tamil Nadu rallied behind Chief Minister Jayalalithaa on Friday and condemned the “harsh and crude remarks” made against her on the Sri Lankan Defence Ministry’s website.

“India should treat the remarks as not just against the Tamil Nadu Chief Minister but against the Prime Minister of the country. It should convey its condemnation to the Sri Lankan government,” DMK president M. Karunanidhi said in a statement.

He said that though he had a lot of differences with Ms. Jayalalithaa, the Sri Lankan government demeaning and belittling the letters she wrote to the Prime Minister on the fishermen issue was unacceptable.

“The DMK has never approved of such remarks. Political parties in Tamil Nadu have all along been telling the Indian government not to act in favour of the Sri Lankan government on this issue,” he said.

PMK founder S. Ramadoss said the Indian government should summon the Sri Lankan High Commissioner and demand an apology from Sri Lankan President Mahinda Rajapaksa and the country’s Defence Secretary. “If Sri Lanka refuses to tender an apology, India should sever its diplomatic ties with it,” Dr. Ramadoss said.

Tamil Nadu Congress Committee president B.S. Gnanadesikan said it was mischievous on the part of the Sri Lankan government not to prevent such posts on the official website. He also called up the Sri Lankan Deputy High Commissioner in Chennai and registered his condemnation.

CPI(M) State secretary G. Ramakrishnan said it was condemnable to ridicule a letter written by the Chief Minister to the Prime Minister.

3 Responses to Parties condemn Sri Lanka for remarks against Jayalalithaa