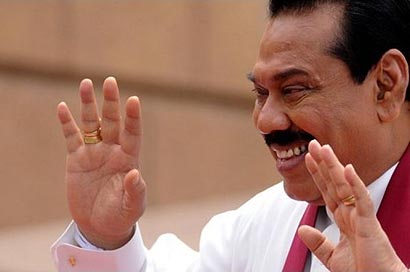 The ruling United People’s Freedom Alliance recorded a landslide victory at Thursday’s Local Government elections winning control of 205 out of the 234 bodies that went to polls inflicting yet another humiliating rout on the UNP while totally annihilating the JVP.

In a ringing endorsement of President Mahinda Rajapaksa’s leadership the voters totally rejected UNP attempts to raise the spectre of a people’s revolution of the type now sweeping the Middle East while also delivering a resounding slap on the JVP who paraded their usual slogans with the intention of turning the voters away from the regime.

UNP’s ploy to parade Sajith Premadasa as the party’s new face also backfired with the MP losing his party ground in Hambantota, nurtured by him for a long time. His party lost Tissamaharama along with the JVP who lost control of the local body after two consecutive terms in power. The UNP won only nine local bodies while the JVP suffered a total route.

The UPFA wrested control of 18 local bodies previously held by the UNP. Significant among these were the Horana and Wattala UCs held by the party for decades.

The United National Party suffered a great blow as it failed to garner the support of people at grassroot level. The UNP’s humiliating debacle proved that emergence of Hambantota district parliamentarian Sajith Premadasa to the limelight would not be able to revive the feeble party.

Final results of the Local Government election manifests the people’s unwavering confidence in the Mahinda Chintana in the path of achieving economic prosperity for the country.

The main Opposition was pushed into third place losing most of the local bodies in the North and the East. It lost almost all its strongholds including the Kataragama Pradeshiya Sabha.

Twelve Local Government bodies including the Mannar and Trincomalee Urban Councils and Vavuniya Pradeshiya Sabhas went to the Illankai Tamil Arasu Kadchi. The JVP which won a seat at the Tissamaharama Pradeshiya Sabha at the last local poll in 2006, suffered a humiliating defeat failing to win even a single local body at this election.

The UPFA won the Tissamaharama Pradeshiya Sabha by a majority of 3,979 votes as against the United National Party which polled only 8,344 votes. The UPFA polled 14,523 dealing a severe blow to the JVP which obtained only two seats.

The United National Party was reduced to only one local Government authority from the Colombo district and Muslim Congress gained control of four local bodies including the Ninthavur and Irakkamam Pradeshiya Sabhas while an independent group managed to win one local authority.

The National Congress and the Upcountry People’s Front won the Akaraipattu and Nuwara Eliya Pradeshiya Sabhas.

The Commissioner thanked all those who helped conduct a free and fair local government election.