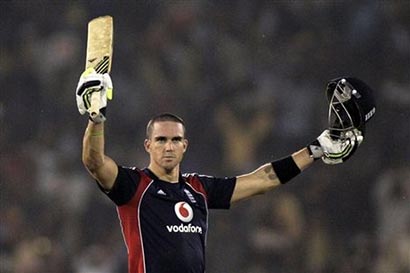 England star Kevin Pietersen retired from all forms of international limited overs cricket on Thursday, a decision which took the England and Wales Cricket Board (ECB) by surprise.

Pietersen, who will continue to be available for Test selection, said in a statement he wished to step aside in order to give the next generation of players a chance to bed in before the 2015 World Cup.

“After a great deal of thought and deliberation, I am today announcing my retirement from international one-day cricket,” said Pietersen, who turns 32 next month.

“With the intensity of the international schedule and the increasing demands on my body, approaching 32, I think it is the right time to step aside and let the next generation of players come through to gain experience for the ICC World Cup in 2015,” added Pietersen, who has scored 4,184 runs at an average of 42 in one-day internationals and averages 38 in international T20 cricket.

Pietersen’s decision comes less than four months before England are due to launch the defence of their Twenty20 World Cup crown in September.

The South Africa-born batsman was man of the tournament when England won the title in the West Indies in 2010, and had indicated a willingness to remain part of the T20 squad in Sri Lanka this year.

However ECB rules dictate that centrally-contracted players must make themselves available for all forms of limited-overs cricket.

“I am immensely proud of my achievements in the one-day game, and still wish to be considered for selection for England in Test cricket,” Pietersen said.

“For the record, were the selection criteria not in place, I would have readily played for England in the upcoming ICC World Twenty20.”

However Pietersen’s decision was greeted with dismay by ECB managing director Hugh Morris.

“The ECB is disappointed by the timing of Kevin’s decision less than four months before we defend our ICC World Twenty20 title,” he said.

“Kevin is a world-class player and I would like to take this opportunity to thank him for his efforts and we look forward to his continued contributions to the Test match side.”