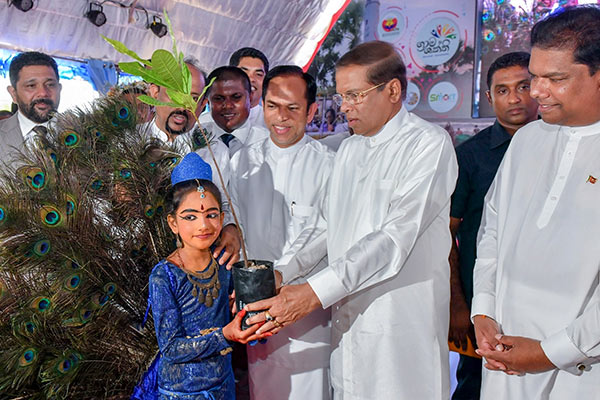 Planting  a plant at the dawn of the oncoming Sinhala  and Tamil New Year, people should join together to accomplish the duties for environmental conservation, President invites all Sri Lankans.

President Maithripala Sirisena said that the value of environmental conservation  is identified not  only Sri Lanka but by  the  whole nation. He said this at the closing ceremony of “Rata Wenuwen Ekata Sitimu”, national development program, held at Weber stadium, Batticaloa,

The objective of “Rata Wenuwen Ekata Sitismu” is  to reap  utmost benefits and  services for the public from rural district level by actively carrying on the national projects  conducted by the President’s office  and the national welfare programs carried on by different ministries. Identifying  the public issues that should be solved through the public institutions,  solving these issues  thorough the  proper government mechanism, will be accomplished through this program.

The second stage of “Rata wenuwen ekata sitimu”, development project, started  centering the Batticaloa district, on  last 8th of April, and covering all 14 divisional secretariats of the district a number of programs were conducted initially. It is significant that a massive public participation could be seen in the event.

At the closing ceremony held  under the patronage of the President, a number of programs were conducted, and  distributing  five thousand coconut plants and kaju plants, presenting loans for selected families for self employment, presenting housing loans for armed force officers, presenting school equipments under sustainable school development, presenting  retirement pensions to farmers and presenting fundamental loans for religious institutes. At thiis event two children who were under probation were handed over to the cudtody of their parents under the “Daruwan Surakimu”national program.

The President further mentioned that, the illicit drugs are  entering the country mostly from the eastern region and it is identified properly to curb it and public is expected  towards strengthening theese efforts.

Minister Gayantha Karunathilake, State Minister Amir Ali, Eastern Province Governor A.L.M.Hisbullah, Western province governor Asad Sali, members of parliament S.Wilayandran, G.B.Shrination, S.Yogeshwaran, and  the public representatives of the province, Secretary for the President  Udaya.R.Senevirathne, and secretaries of ministries, Secretary of Batticaloa District, and other government officers, Inspector General of Police, Pujith Jayasundara, and  representatives of the Tri forces were  present in this event.

The “Smart Sri Lanka” project that opens the doors for the youth opened its Battocialoa Career guidance centre of the career guidance network under the patronage of the President.

The President who unveiled the commemoration plaque and opened the career guidance unit engaged in an observational visit at the premises. The Director  General of Smart Sri  Lanka project Eric Weerawardena  and others were present in this event.

2 Responses to Plant a sapling at auspicious time, President urges all Sri Lankans