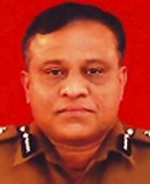 Police Spokesman SSP Prishantha Jayakody has been transferred from his post with effect from yesterday and appointed as the Director of the Police Examination Division.

His place is taken by Superintendent of Police G. M. H. B. Siriwardena, who was the Director of the Police Examination Division.

SSP Jayakody assumed duties as the police spokesman for a second time after the sudden transfer of then incumbent SSP Ajith Rohana to the Ampara Division last October.

Jayakody had previously served as the police spokesman until Oct. 2011 and was succeeded by SSP Maxi Proctor when he went to Haiti as the Head of the Sri Lanka Contingent of the UN peace keeping mission there.