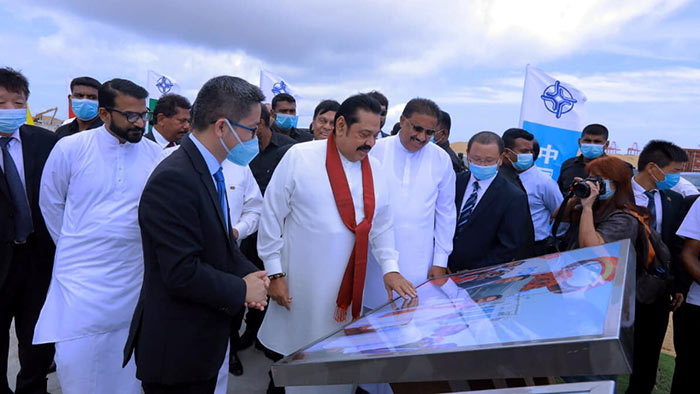 Prime Minister Mahinda Rajapaksa yesterday said the Colombo Port City Project will become the main source of income for the country and the project will generate more than 83,000 employment opportunities.

The Prime Minister made these remarks after inspecting the progress of the Colombo Port City, marking the sixth anniversary since the commencement of the project.

The Prime Minister said that the project costing above US$ 15 billion was delayed for two years during the previous government.

He added that Sri Lanka had for the first time reclaimed lands from the sea through this project. “During our childhood we heard of only sea erosion and land erosion in the coastal belt and lands being washed away due to sea tide,”, he said.

He said that the construction of the project was commenced by himself as then President with his Chinese counterpart Xi Jinping exactly six years ago.

The Prime Minister also thanked the government and the people of China for extending their cooperation to make this project a reality.

“The Communist Party of China will celebrate its centenary anniversary on October 1.We as Sri Lankans like to extend our best wishes to the president and the people of China,” he said.

The two presidents laid foundation stone for the project on September 17, 2014 and the construction of 3.2 km stretch of breakwater has been completed.

Later the Prime Minister visited the sales gallery where he got himself acquainted with the ongoing construction of the project.

2 Responses to Port City will generate over 83,000 jobs – Prime Minister