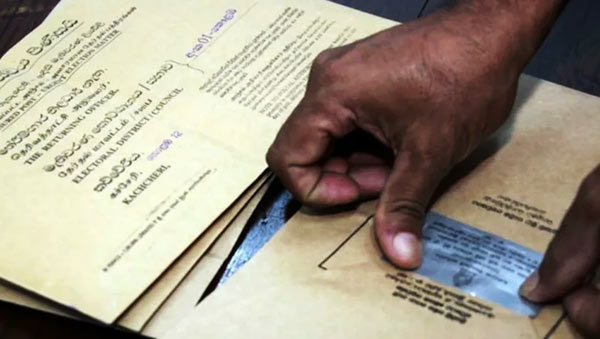 Postal voting for the Presidential Election 2019 commenced this morning (31) and the voters are allowed to cast their postal votes from 7.00 am to 4.00 pm.

The postal voting of public servants and military personnel will accordingly take place today and tomorrow (01) while the postal voting of the officers of District Secretariats, Election Offices and Police Stations is scheduled to be held on November 04 and 05.

The officers of the Election Commission and the voters who are unable to cast their ballot on that day will be given the opportunity on November 07, from 7.00 am to 4.00 pm at their respective District Election Offices.A total number of 659,030 voters are reportedly eligible to cast their postal voting.

The Election Commission said the voters, whose postal vote applications were rejected, are allowed cast their ballot as a normal vote on the 16th of November. Meanwhile, stationed and mobile patrol police officers will ensure security at polling stations during the balloting period.

The People’s Action for Free & Fair Elections (PAFFREL) has assigned nearly 1,000 properly trained election observers to polling stations island-wide to monitor the postal voting process, especially where the voter turnout is expected to be high.