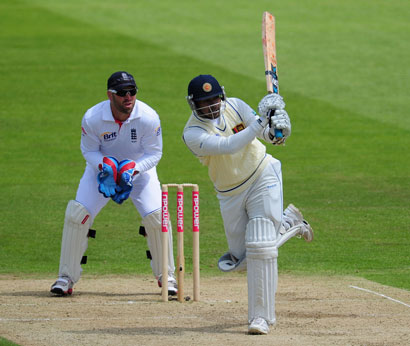 England will have expected to encounter problems removing a Jayawardene during this series, but that was likely to be Mahela not Prasanna. Sri Lanka’s wicketkeeper, batting in the elevated position of No. 6, hit his third Test hundred to lift the visitors to an impressive 400 on the second day in Cardiff. Thilan Samaraweera and the lower order also played vital hands to ensure a frustrating time for England who lost Andrew Strauss in the final over of the day to finish on 47 for 1.

Right from the beginning of this Test Sri Lanka have impressed with their mindset. They were flexible enough to adjust the balance of their side – and the choice of two spinners could yet prove a masterstroke – while Tillakaratne Dilshan opted to bat when many visiting captains may have hidden behind bowling first. Then the top order took on the responsibility of setting up a platform with a stubborn and committed display. To remove Strauss, who was well caught at second slip off Suranga Lakmal with five balls remaining, capped off a day that couldn’t have gone much better for them.

Having opted for a five-man attack it put pressure on Prasanna to perform the role of a frontline batsman. A Test average of 30 showed he was capable but, as Matt Prior has occasionally found, there is a different onus on a wicketkeeper when they walk in at four down rather than five. Prasanna, though, handled his task with aplomb and, although he was dropped at slip on 89 by Strauss off Graeme Swann, it took nothing away from his achievement as he reached a hundred from 147 balls.

What made it even more commendable was that England were in the middle of one of their best periods with the ball as James Anderson, who would later worryingly leave the field with a back strain but return as nightwatchman, found swing in the first session. Sri Lanka hadn’t added a run when Prasanna’s namesake, Mahela, edged a beauty to first slip which shaped back into him after a series of deliveries moved away. He tried to drop his hands but it was too late and the catch was superbly taken by Strauss diving behind second slip.

It was tough work for the batsmen against Anderson and Chris Tremlett – the combination of swing and bounce – but all Sri Lanka’s batsmen knuckled down. When Tharanga Paranavitana’s 191-ball stay was ended by an inside edge into his stumps against Tremlett – shortly after being struck in a very painful area – it brought Prasanna to the middle at 159 for 4 and a tipping point of the innings. England will have believed they could break the back of Sri Lanka’s resistance but, not for the last time, came up against a stubborn obstacle in a fifth-wicket stand of 84 between Samaraweera and Prasanna.

Samaraweera took a hard blow on the arm from Tremlett and kept the slips and gully interested by playing away from his body, but also collected some confident boundaries. Whenever the England bowlers strayed onto his pads he was quick to pick them off although he wasn’t far off edging to third slip when the ball just eluded a diving Alastair Cook.

Still, it was comfortably Samaraweera’s best effort on British soil having failed to reach double figures in his previous four Test innings. He went to fifty from 72 balls as the game drifted with England waiting for the new ball before he was squared up by Anderson and edged to second slip. Again, the hosts sensed an opening but it wasn’t to be.

Prasanna had started his innings as a useful understudy for Samaraweera then became the senior partner. He twice gained boundaries to third man through the slip cordon but batsmen deserve some fortune when the ball moves around and he took advantage of Swann’s introduction to collect two leg-side fours. It was a perfectly paced innings and after tea he became more aggressive by back-cutting Stuart Broad and elegantly drove Swann through cover having been given his life at slip.

Sri Lanka’s lower order also played a crucial role in keeping Prasanna company. Farveez Maharoof, who has been in good form for Lancashire, twice faced the DRS system in consecutive overs. The first was a waste after Broad seemingly convinced Strauss to use a review when Maharoof was clearly struck outside off stump. The second was more understandable when Anderson swung one back into Maharoof’s pads, but the batsman again survived as the on-field decision remained.

Broad was the least convincing of England’s pace bowlers and Strauss was further hampered by Anderson’s injury. It meant Jonathan Trott was given a ball just 12 overs old, although a stroke of luck went England’s way when Trott deflected a straight drive into the non-striker’s stumps to remove Maharoof.

Thisara Perera showed few nerves on his Test debut in a stand of 68 for the seventh wicket including a lofted straight drive against Tremlett. Broad broke through to claim his 100th Test scalp, having taken number 99 at Adelaide in December before injury struck, when Perera spooned another drive to mid-on.

Rangana Herath then helped Prasanna add 51 for the eighth wicket before the last three wickets fell in three overs to give England a 90-minute session with the bat. They were within touching distance of surviving unscathed, but it was Sri Lanka who left the field with a spring in their step.