President appeals to youth: Be partners in development 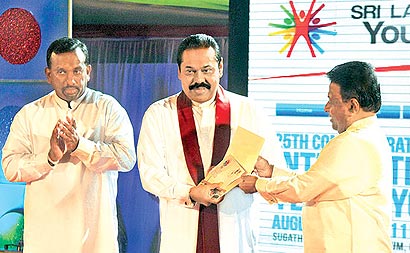 President Mahinda Rajapaksa addressing over 5,000 young stakeholders at the Sugathadasa Stadium during the launch of the International Year of Youth in Sri Lanka (August 2010 – 2011) yesterday, proclaimed that the country’s youth were not only the leaders of tomorrow, but also the partners of today in propagating the nation’s development, peace and social change.

He said that the responsibility of taking the country forward in the path of social and economic prosperity while preserving the hard won freedom and peace is vested with the young generation.

The International Year of Youth has been proclaimed at a time when the Sri Lankan youth’s hopes and aspirations were coming into fruition.

In this context Sri Lanka as a whole has more responsibility than others to join the Year of Youth with new hope and vigour, he added. President Rajapaksa addressing local youth as well as international representatives who had packed the Stadium noted that this year’s theme ‘Dialogue and Mutual Understanding’ was very relevant to the present era and more so in the Sri Lankan context.

He said that he was happy to note the cheerful smiles on the faces of youth and reminded the gathering that this was not the case one year back.

“For all of us to smile scores of other young people like you had to sacrifice their lives and limbs. In order for their sacrifice to not be in vain we have to protect the freedom and peace they gave us. It is time to make their sacrifice meaningful by developing this country and making it a better place for everyone to live” he added.

He observed that he had great belief in the country’s youth and they had to be committed to propagate the expectations by being the premier custodians of peace, development and a morally rich society.

The President on the occasion officially launched the UN declared August 2010 – 2011 as International Year of Youth: under the theme ‘Dialogue and Mutual Understanding’ in Sri Lanka. The year also coincides with the events 25th anniversary.

The objective of this important international year is to promote youth participation by fostering, developing and deepening the dimension of dialogue between cultures, religions, generations, as well as between policy-makers and young people.

In line the Ministry of Youth Affairs has organized many projects for the benefit of Sri Lankan youth. President Rajapaksa on the occasion also launched the web site www.srilankayouth.lk. A commemorative stamp and First Day cover too was issued.

The many cultural events on display courtesy the National Youth Council added colour to the celebrations.

Youth Affairs Minister Dullus Alahapperuma and his Deputy Mahindanadha Aluthgamage along with several other Ministers and dignitaries too were present.

Home » President appeals to youth: Be partners in development