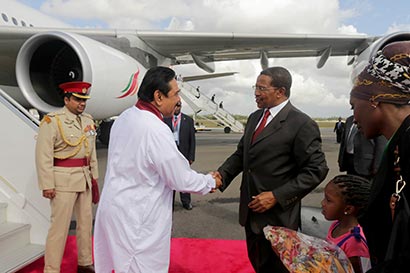 Tanzanian President Jakaya Mrisho Kikwete warmly welcomed President Rajapaksa at the airport. A little girl presented a bouquet of flowers to the President while native dancers performed on the side line of the welcoming ceremony. The President was also accorded a Guard of Honor and gun salute.

Not only will this be President Rajapaksa’s first visit to both countries, but it will also be the first visit of any Sri Lankan President.

President Rajapaksa will hold bilateral discussions with his Tanzanian counterpart and also attend the International Smart Partnership Dialogue in the city of Dar es Salaam.