President cautions the North: dont’ give the devil a chance 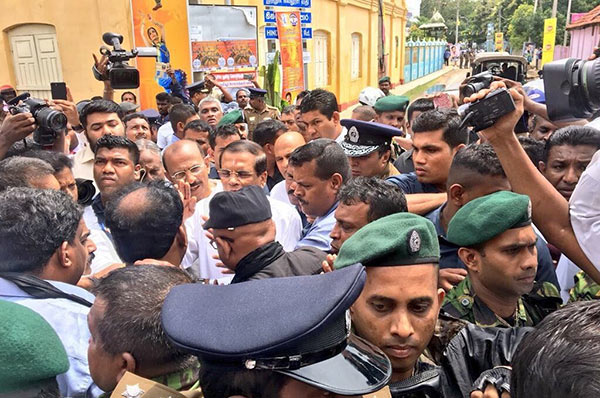 “If you stage protests against me and I am weakened, the devil will get an opportunity,” President Maithripala Sirisena told a gathering in Jaffna yesterday.

The cryptic unscripted comment, which led to speculation as to who he referred to as the devil, was made by the President when he addressed the National Tamil Language celebrations held at the Jaffna Hindu College yesterday.
Jaffna was in lockdown on Friday, after many local Tamil groups staged a hartal, calling for the release of PTA detainees and the protests continued yesterday despite a Court order banning them.

On his way to the Hindu College the President stopped his motorcade near a group of protesters and waded into them. He was seen talking to them as they shouted slogans.

Later at the National Tamil Language event he told an audience mainly made up of schoolchildren that he had asked the protesters why they were holding black flags. He said, “Then they told me about the prisoners issue and I called them for discussions because that is the only way we can resolve our problems, but they said they want me to implement their demands.

“I don’t think they should hold black flags but instead white flags of peace and unity.” He also noted no one should resort to violence and that the war only ruined the lives of the poor.
“The rich escaped to foreign countries and the rest suffered. Many leaders perished, so raise white flags not black flags,” the President said.

He went on to say that he “took the responsibility to take care of the people and bring peace and unity and I am working towards that.”

The President added that he understands that the Jaffna farmers need assistance because they lack many facilities.

He also noted that bank loans for farmers has been an issue as they are unable to settle some of the loans and he would look into that matter, too. He also said the Northern farmers told him to stop importing potatoes as they can supply enough for the country and that too he is considering looking into.

After opening the IT laboratory of the Jaffna Hindu College, he said he was proud to hear that old boys of this college are holding high positions overseas bringing glory to their motherland. He urged the students who were gathered to receive their prizes for their contribution for speech and drama and literature that they too should set an example in the global arena. “There is no competition within the class or school but the challenge lies outside where you have to compete in the global arena and be prepared for it,” the President urged the students. “You must be the best, very important personalities who compete and challenge the world.”

He said he was amazed to see the talents of the Tamil children and wanted many of the dance and drama performed yesterday at the school to be staged in events held in the South. “The South should see these performances too,” he noted.

3 Responses to President cautions the North: dont’ give the devil a chance

Home » President cautions the North: dont’ give the devil a chance